Widdup made it 98 when he opened his new season account at Goulburn on Monday with a horse he described as being a "nightmare".

Jailbreak broke through for a maiden win over 1300m to the relief of his trainer.

"He's got all the ability, but even though he won he still did a few things wrong," Widdup said.

"Hopefully now that he has broken through, he will go on with it. I've always had a good opinion of him."

Jailbreak was the highest-priced yearling by Rubick when offered at the 2018 Magic Millions sales at the Gold Coast. A member of the Segenhoe Stud draft, he fetched $470,000.

Widdup thought enough of Jailbreak to start him off in the Wyong 2YO Magic Millions Classic (1100m) last December, but decided to geld him when he didn't reproduce his excellent early trial wins at Hawkesbury and Randwick in his first four starts.

"He won another trial at Hawkesbury on July 15 after being gelded and then ran fifth at Canterbury nine days later," Widdup said.

"I put a nose roll on him and dropped him back in grade to the country.

"I'm not sure if the nose roll helped, but what I liked was the way he stretched away in the last bit).

"That's what he had been doing in winning his trials."

Widdup is looking forward to more runners in the coming weeks, having started six horses at last Friday's Warwick Farm trial session where fillies Birdy and Darling Point were successful and seven more young horses at the Hawkesbury session on MOnday where another filly Jokes was successful.

Widdup's Chinese-born apprentice Qin Yong partnered Jokes, and the trainer is keen to get him going again after returning from a visit to his homeland.

"He is working hard and just needs the right opportunities," WIddup said.

Co-trainers Mitchell and Desiree Kearney also joined the 2019-20 winning list when they made it a Hawkesbury double at the Goulburn meeting with Quick Spin (Travis Wolfgram).

The Hard Spun five-year-old's two wins since joining the Kearney team have been at Goulburn. 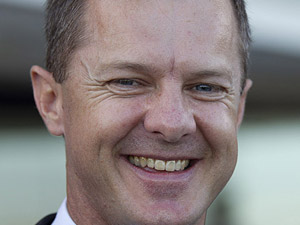