After beating Scales Of Justice in the Spring Stakes first-up, exciting colt Dalasan will now chase a Danehill Stakes win on a path to the Caulfield Guineas.

Armed with an irresistible form line, Caulfield Guineas favourite Dalasan is set for his first Melbourne appearance of the season in the Group Two Danehill Stakes at Flemington.

The colt, winner of three of his four starts, runs for the first time in four weeks in Saturday's 1200m straight-track sprint for three-year-olds having highlighted his potential when upstaging the older horses in the weight-for-age Spring Stakes on his home track at Morphettville in his season return last month.

Another Group One winner, Despatch, was fourth in the Spring Stakes.

Dalasan's only defeat was a luckless second in his only Melbourne appearance in the VRC Sires' Produce Stakes at Flemington in March before a spell.

His co-trainer Leon Macdonald, a member of the Australian Racing Hall of Fame, is excited about what the colt might be able to achieve this spring and beyond.

"He probably should be undefeated," co-trainer Leon Macdonald said.

"I think he probably took the next step when he beat the Group One horses in the Spring Stakes.

"I did expect him to run very well in that race. But to beat those horses, especially Scales Of Justice who was fit, it was a bit hard to think he would but he did.

"I don't think there was many excuses for anything in the race."

Dalasan is shading McNeil Stakes winner Super Seth for favouritism for Saturday's race and Macdonald is confident Dalasan has come on nicely since his first-up win to be ready to showcase his Caulfield Guineas credentials again on Saturday.

"I would have thought that he had improved," Macdonald said.

"He's probably still got a bit of improvement in him, I think. And there probably needs to be too if he's going to win the Caulfield Guineas." 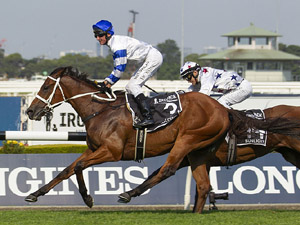