Racing and Sports highlight our standout plays at Australian TAB meetings for October 4.

There's speed right across the barriers and an number are capable of leading. SARTORIAL SPLENDOR (9) has the speed to clear the wide gate and brings the best form. Improved again leading and missing a nose at Caulfield in the Open 3 and will have taken improvement. HEARTY LASS (11) wasn't beaten far in Stakes grade before the spell and led and was just topped off late when resuming. Also needs to manage a tricky gate, but has the figures to play a major role. BISCARA (10) has been switched to the Matt Dale yard and three back was beaten a lip in Stakes company at this distance range. Meech will push forward and the filly is needs to be kept very safe. HUMZZ has missed a lip the last two and will use the low gate. He's a chance. SELECTION: #9 Sartorial Splendour is promising and just needs a good ride.

As a FREE Racing and Sports offer, click below for today's Moonee Valley Computer Card.

Not a lot of early speed and it may come from the wider drawn. EDINBURGH (14) is back from Flemington and is a strong winning chance in this company. Draws handy on a quick return and will race more kindly with the blinkers coming off. CONTRITION (13) only missed by a nose at Bairnsdale on debut. This is tougher but she can keep improving. MIRACLE (7) is an improver drawn low and will be around the mark. ACCELERANT (10) will be fitter and gets Oliver first time. Expect him to be hitting the line hard. SELECTION: #14 Edinburgh has the figures to take this out.

Beleura Demon and Scepter Of Power to battle for early honours. SCEPTER OF POWER (3) has not raced since 7 July and has changed stables over the break. Was about the mark at every run last prep, including a 3 lengths 4th when resuming over today's trip at Warwick Farm. If he returns with a similar performance today he will be saluting. A KRUPT PICK (1) also resumes and is the logical danger. Had two runs over 1300m last time in work for a couple of 2nds at Narromine. Often needs a run or two but in this mediocre lineup he should be in the finish. Very hard to say something positive about any other runner with exposed form. PRIVATE POET (9) and LOVES A HIT (12) are both first starters who are going okay at the trials without dazzling. Expect they can be competitive. SELECTION: #3 Scepter Of Power will be too good for these.

Mohican and Whispered Prayer to run them along at a good tempo in the feature race. WAIHEKE (4) transferred to Keith Dryden from Chris Waller and has placed at both runs this prep for the new stable. The latest was an eye-catching 3rd at Canberra over 1400m where he kept coming from back in the field on the corner to get pretty close on the line. This trip third up looks the ideal scenario. FORTUNE'S PATH (5) had showed signs of improvement and it culminated in a come-from-behind win over 1600m at Nowra last start in a Bm66. Can race a touch closer today from the inside gate and he will be very hard to hold out again now that his confidence is back. GARROS (3) made a run from the back along with Fortune's Path at Nowra last time and was just a neck behind today's rival in 3rd in a thrilling finish. Shoulders a big weight again today but will be hitting the line hard. CHAIRMAN'S CHOICE (7) has switched stables since winning over 1800m at Warracknabeal five weeks back. Worth considering. SELECTION: #4 Waiheke looks a bomb-proof each-way bet.

Scarlet's Choice and Lots Of Promise can run them along. COACHES AWARD (2) improved sharply second-up placing at the Gold Coast. He can stalk from the handy gate and just has to hold the form to go close. SCARLET'S CHOICE (1) led and deserved the Dalby win. The claim is handy and he's a chance to repeat. DER SIEGER (5) is racing well and is back in trip following a 49 day freshen. Draws to advantage and shouldn't be far away. MASSABIELLE (6) can do a bit wrong but has more ability than the formline suggests. NO DOUBT A CRACKER (7) can improve third-up and has had good early support. SELECTION: The favourites look well-placed to win the last three races on the card but are short, with Written With Ease in Race 5 appealing most. Going for a bit of value in Race 2 with # 2 Coaches Award each way. 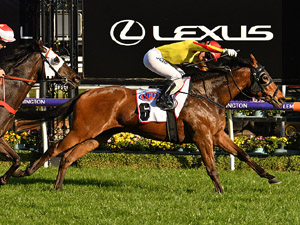