Trainer Les Kelly is already looking to next winter with Ipswich winner Take Tea who scored a last-stride win.

Gold Coast trainer Les Kelly was already thinking about the next winter carnival after his filly Take Tea overcame difficulties to win at Ipswich.

The filly was pushed deep on the home turn and took the straight to catch Spirit House ($3.20) who had shot through on the inside.

Take Tea was third in the Group Three Ken Russell in May and Kelly believes she can get more black type.

"I won't do much more with her this time but I think she will be a nice horse in good races next winter," Kelly said.

It was a genuine family affair when the Tony and Maddy Sears training partnership got their eighth winner in a month with Special Thing ($19) in the Sky Racing Handicap (2180m).

Special Thing, the outsider in a field of five, is owned by Tony's wife and Maddy's mother Leigh.

"I wanted to bring her to Brisbane last week but Tony decided on Dalby where she had no luck. He should listen to me more often," Leigh Sears said.

Jockey Jim Byrne showed why he is regarded as the king of Ipswich riders with his win on Patriot Missile ($4.50) in a maiden.

Byrne didn't panic when the pace was frantic in the middle stages and timed his finishing run to perfection.

Patriot Missile's won continued the good Queensland run for Ballina trainer Stephen Lee who bought the gelding for $2000 in an on line auction.

Byrne later made it an early double when he led all the way on Hollaback Girl ($).

Trainer Tony Gollan said he had always believed Hollaback Girl was a Saturday-class horse but she had a career littered with bad luck. 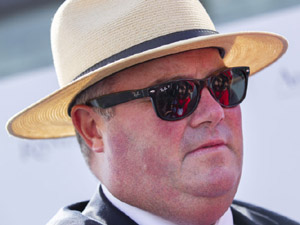