Stakes target next for gavelhouse purchase

The John Bary-trained Cinzento will be set for a likely tilt at stakes level next up after breaking maiden company at Taupo on Wednesday when winning the Ascot Farm (1300m).

The Dalghar filly settled to the rear of the field for jockey Donavan Mansour after jumping away from the outside barrier in the nine horse field.

She made steady progress around the field from the 500m mark, but was pushed wide after Laureate failed to handle the turn into the home straight.

Cinzento  was able to regather herself and ran home strongly to grab Wild West on the line to win by a short head.

It was the eighth start for the three-year-old who is raced by the Challenge No.10 Syndicate, which is managed by Adrian Clark.

"The penny dropped two starts ago at Hastings, it was a really good run," Clark said.

"We said to Donovan today, don't change her pattern, even though it looks like today's the day to be on the speed. It all worked out and I'm delighted for the team."

Clark purchased Cinznto off gavelhouse.com after an unfortunate incident with another syndicate filly.

"This syndicate had two fillies, one was by Atlante the other was Jennifer Eccles and the Atlante went through a fence," Clark said.

"I said to the syndicate I have to buy you another horse to replace it as a goodwill gesture.

"I found this horse on gavelhouse and loved her. She was raw and she was cheeky.

"John and his team have moulded her. The penny's dropped, she's coming good now and I think we'll probably have a crack at a stakes race now."

The syndicate looks to be in for a couple of exciting months with Jennifer Eccles also being aimed for stakes assignments.

"This is the syndicate's first winner, although they did win with Jennifer Eccles but they took it off us at Hastings," Clark said referring to the filly's relegation to second behind Kali two starts ago.

"Such is the order of the race we probably have to go to the Soliloquy, but I've said to the syndicate today if we're not good enough to be amongst it in the Soliloquy we probably shouldn't be getting on the plane anyway. We'll see what happens."

It has been a good week for graduates of online auction site gavelhouse.com, with $5,000 purchase Cinzento now shaping as a likely stakes horse, and already boasts a fourth placing in the Gr.2 Wakefield Challenge Stakes (1100m) at two.

Last weekend's Gr.3 Bart Cummings (2500m) winner Surprise Baby was a $5,500 purchase from gavelhouse, while there could be further dividends for purchasers off gavelhouse this weekend, with the dams of Gr.1 Toorak Handicap (1600m) topweight Madison County and Gr.1 Caulfield Guineas (1600m) hopeful The Holy One sold for $800 and $900 respectively. 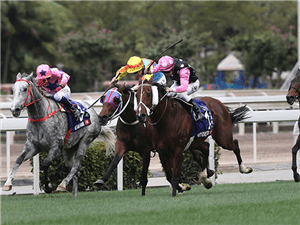