Had Danny O'Brien not fought a long legal battle to clear his name, he would not have won his first Melbourne Cup with Vow And Declare.

One being a three-year, $1 million legal battle to clear his name over doping allegations.

If the ban had stood, O'Brien would still be sitting on the sidelines serving out the final months of a four-year disqualification for administering cobalt to a racehorse.

Instead, O'Brien's dream of a Melbourne Cup came true after the Australian-bred, trained and owned Vow And Declare saluted in the $8 million race.

O'Brien, views the legal saga and the hit it had on his training business as an example of the ups and downs of the racing business.

"You learn that there's good times and bad," the Flemington-based trainer told reporters.

"Ultimately through that period, I was still training and evolving as a trainer and training winners."

It was during the long, and ultimately successful, court battle to clear his name that O'Brien came into contact with former NSW MP Geoff Corrigan.

The pair first met when O'Brien bought the horse Lycurgus at a yearling sale and Corrigan walked up offering to buy half.

"There's plenty of sliding doors moments that the horse has ended up with us," O'Brien said.

"There's a lot of good things that combine to put you in this position and they're not all good judgment but a lot of them are good luck."

Corrigan knew about O'Brien's cobalt battle at the time, but was always one to believe that you take people as you find them.

"I still think to this day he's a good bloke.

"He's an even better bloke now," he added, laughing.

O'Brien never thought of giving up during the cobalt saga.

Nor did he give up on every racehorse trainer, owner and jockey's dream of winning a Melbourne Cup.

"I think everyone who puts a saddle on a horse every morning never gives up hope," O'Brien said.

"It's a game of hope. You have to keep persevering." 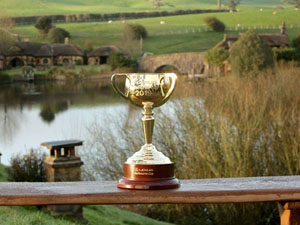