In a race that did not go to plan, Spending To Win has showed his Starlight Stakes rivals a clean pair of heels to score an all-the-way win.

Curses quickly turned to cheers for trainer Peter Snowden as he went from lamenting Spending To Win's early keenness to watching him run his rivals ragged in the Listed Starlight Stakes.

Snowden said he did not expect the six-year-old to lead Saturday's 1100- metre sprint at Rosehill and feared he may have overdone it in front.

"It wasn't the plan," Snowden said.

"He is the sort of horse, especially fresh, he always over-races and can leave himself short so I was kicking stones."

But when Tim Clark slipped Spending To Win some rein and the horse extended his lead, Snowden's mindset came full circle and he knew the horse had something to offer.

"When he kicked on the corner I said, 'he's going to give this a good shake' because he had three trials going into it," Snowden said.

"We normally only give him one or two but there were no suitable races for him so I gave him a good platform to work from.

"That was full of courage there today. He probably ran out of gas the last 50 or 100 metres but he did enough to win."

Spending To Win started $41 and defied a betting ring drift to cling to victory by a long head over Glenall ($6) with $2.80 favourite Handle The Truth another length away.

The horse is raced by Trevor Stuckey and Penny Yan-Stuckey who have enjoyed great success as owners, notably with multiple Group One winner Racing To Win.

Like Snowden, Clark said he had not planned to make the running but got away with comfortable mid-race sectionals when he got there.

"For an 1100 around here I thought he got it nice enough in the middle stages and with no weight on his back he gave a really good kick," Clark said.

Josh Parr said Glenall chased hard and would have picked up the winner in another bound.

"It was a really good effort. The winner was just too good, another stride and we would have won," Parr said. 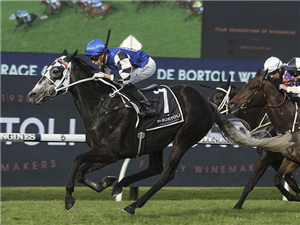