Japanese runners have had a good trot in the Longines Hong Kong Cup run at Sha Tin on Sunday.

The Longines Hong Kong Cup is a Group 1 race run under Weight For Age conditions for the middle distance horses at Sha Tin conducted by Hong Kong Jockey Club.

It is run as part of the Longines Hong Kong International Races (HKIR) meeting run in December each year.

The Longines Hong Kong Cup is run over 2000m. It was first run in 1988 and was won by Flying Dancer.

The first running was over 1800m and for locals and horses from Singapore and Malaysia too. The Australians and New Zealanders followed.

The Longines Hong Kong Cup became a Group 3 from 1993 then Group 2 after that until 1999 when it was renamed the Hong Kong Cup and was given Group 1 status.

Most wins by a Jockey (3): Frankie Dettori.

California Memory is the only horse to win two Longines Hong Kong Cups.

Before the race truly became international Australian horses won and they were not the elite G1 horses either.

Grey Invader and Kessem were good solid kiwi stakes horses who won. Then Romanee Conti won in 1992. She was Group 1 placed but her claim to fame is being the dam of the Caulfield Cup/Melbourne mare Ethereal.

In 1994 State Taj won with Damien Oliver aboard and is the only Australian winner.

One of the best winners was Snow Fairy. She was six time G1 winner over four different countries.

The Japanese have been to the fore with recent wins by A Shin Hikari and then the champion Maurice who ended his career in grand style.

The 2018 Longines Hong Kong Cup was won by Glorious Forever from Deirdre and Time Warp. 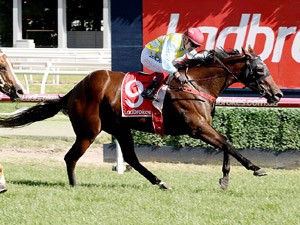 News Article
Updated 9 hours ago
Ellerton and Zahra with more Plate chances
Facts and figures on the G1 Oakleigh Plate
Vow And Declare on track for autumn return
Dylan Caboche returns with winner at Sale
Westport out to bounce back at Caulfield
Ryan colts to make their presence felt
Futurity Stakes: What you need to know
All-Star line-up chase a start in Futurity
Clean slate for Mustajeer after Cups bid
Two feature race chances for Begg stable