Danny O'Brien is delighted with the way Melbourne Cup winner Vow And Declare is progressing in his early build-up towards his autumn campaign.

Melbourne Cup winner Vow And Declare could chase feature races in three states during the autumn and winter starting with the Australian Cup.

The Danny O'Brien-trained stayer rose to stardom in the spring winning the $8 million Melbourne Cup in a memorable finish after running second in the Caulfield Cup.

Vow And Declare was given a six-week break at O'Brien's property near Barwon Heads and he has been back in work for almost a month based at the Victorian coastal property.

The $4 million Queen Elizabeth Stakes (2000m) in Sydney on April 11 features in the plans for Vow And Declare before he heads further north for a winter campaign in Brisbane.

O'Brien has not ruled out running Vow And Declare first-up in the Group One Australian Cup (2000m) at Flemington on March 7.

"We'll step things up over the next month. He'll come to Flemington to trial some time in February and we'll have a look at him from there.

"The plan is certainly that he runs in the Queen Elizabeth up in Sydney and then up to Brisbane.

"We want to be in Brisbane with him over the winter like we were last year.

"If he did run in Melbourne, if he was up quick enough, he could run in the Australian Cup before he got on the road.

"It is obviously tempting being on his home track and we're mindful that if we did run first-up in Sydney and you get wet ground, it's a difficult first-up assignment.

"If I'm happy with him over the next six weeks then he could easily run first-up in the Australian Cup."

Vow And Declare campaigned in Brisbane last winter, finishing second in the Queensland Derby before winning the Tatt's Cup over 3200m which provided a platform for his spring campaign.

Being only a lightly raced four-year-old, O'Brien expects Vow And Declare will keep improving.

"He's bigger and stronger than he was in the spring," O'Brien said.

"And he needs to be if he's going to step into weight-for-age, and also if he steps back into handicaps in the spring he's going to be right up the top of the weights instead of the bottom.

"He's got to keep improving if he's going to be competitive in those races again - and we think he can." 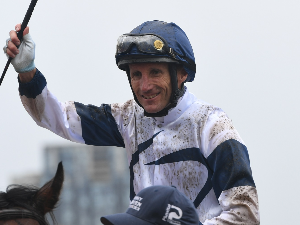