South Australian gelding Gytrash has upset some of the country's best-credentialed sprinters to give trainer Gordon Richards his first Group One in the Lightning Stakes at Flemington.

Gytrash missed most of last year's spring carnival with a knee issue after jarring up when second in the Group Three The Heath at Caulfield, but the four-year-old gelding made a triumphant return on Saturday to land easily his biggest win.

Unbeaten in his two previous Flemington appearances against his own age last winter, Gytrash had a much stronger challenge to contend with in the weight-for-age Lightning (1000m) which featured multiple Group One winner Nature Strip and dual Everest winner Redzel.

Ridden by Mark Zahra, Gytrash ($21) was one of three horses to go to the inside section on the straight course and he tracked leader Redzel ($7.50) while $1.45 favourite Nature Strip bowled along in front among the four horses who came down the outside.

Gytrash surged past Redzel at the 200m and defeated him by a length while Loving Gaby ($5) finished another short neck away third after getting past Nature Strip on the outside.

The win was a triumph for Richards who experienced the thrill of his first Group One in a career spanning five decades.

"Not that I've had many tries at it. But if ever I was going to win one this is the horse that was going to do it.

"He's just a machine. His work leading up to this, Jason Holder rides him fast work for me over in Adelaide and rode him in a special gallop between races and said 'this horse frightens me'."

The Group One Newmarket Handicap (1200m) at Flemington has been Gytrash's main aim and despite knowing he had a talented sprinter going well he was a bit surprised he was able to win the Lightning over 1000m and believes there's improvement to come from the gelding.

Redzel's jockey Kerrin McEvoy looked at the stewards' footage but did not lodge a protest.

"He just got crowded over that last furlong but it was a great run," McEvoy said.

"He's shown that he's come back in great order.

James McDonald said Nature Strip raced too fresh and keen early which told at the finish. 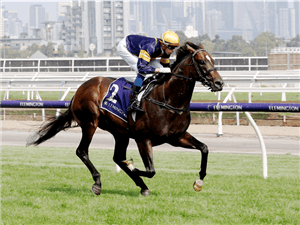