And he seeks a $1.5m Tancred Stakes breakthrough at Rosehill Gardens on Saturday.

He also had three runners last year when Big Duke  (Avdulla) was runner-up to Avilius, who defends his Tancred title at the weekend.

"I've got a slight preference for Mustajeer over Mugatoo as the best chance of my trio," Lees said this afternoon.

"It's the race we have targeted with him. His two runs have been excellent, he is in great order and handles soft ground."

Mustajeer, freshened after an out of character failure in the Melbourne Cup (3200m) at Flemington in November, won the Listed Parramatta Cup (1900m) at Rosehill on February 22 under 60.5kg before chasing gamely when runner-up to the talented Master Of Wine in the Group 3 Sky High Stakes (2000m) at the same track on March 14.

Lees wasn't making excuses for Mugatoo's first Australian defeat when narrowly beaten by English visitor Young Rascal in the Group 3 Manion Cup (2400m) at Rosehill last Saturday, but says the gelding will be ridden a bit more conservatively this time.

"I've got no problem backing him up; he has done well this week and it's a big prizemoney race and worth having a go at," he said.

"Of course, he is now going from handicaps to weight-for-age."

Lees has decided to put blinkers on Danceteria, who hasn't been placed in two recent runs at Randwick and Rosehill since joining his team.

"He has been disappointing, but I feel he can run better getting out to 2400m," he said.

"I wasn't going to start her until the Coolmore Legacy Stakes (1600m) at Randwick in a fortnight, but racing is being conducted on a day to day basis at present, so this race looked a good option," he said.

"Invincible Gem had to work hard from a wide barrier in the Coolmore Classic and is much better drawn, whilst Delectation Girl will go back from the outside draw."

It's not often blinkers go on a last start winner, but that's the case with Blazing Sunrise (Avdulla) in the Group 2 Tulloch Stakes (2000m).

"He is up a few grades on his Gosford victory, and it's the right time to put blinkers on him," Lees said.

Lees also had no qualms about backing up Aliferous (Avdulla), who will be joined by Saunter Boy (Hugh Bowman) in the Group 3 Neville Sellwood (2000m).

"Aliferous backed up well in Brisbane last winter, but this is a stronger race than she contested last week (when fourth to Missybeel in the 1900m Group 3 Epona Stakes against her own sex)," he said.

"As for Saunter Boy, he can do anything on the track, but is yet to really reproduce it in his races here."

"Game Of Thorns wasn't far away in the Kembla Grange Classic in a bunched finish and, though I don't think she can beat the top two (Funstar and Probabeel), I'm expecting her to run well," Lees said.

"Provided it's not a bog, I also feel Tactical Advantage can run a race second up. He is going well."

. Lees has reported to RacingNSW stewards that El Dorado Dreaming and Red Cardinal will take no further part in the autumn carnival.

El Dorado Dreaming has had throat surgery, and Red Cardinal has strained his near fore suspensory. 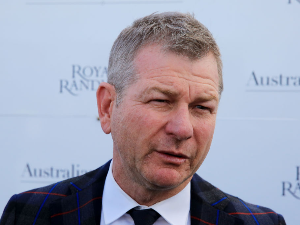