With racing in Tasmania in shutdown, leading jockey Craig Newitt has relocated to Victoria and has teamed with Immortal Love to score at Flemington.

Trainer Matt Cumani's hopes of an early Flemington double have been thwarted by jockey Craig Newitt and an impressive on-pace victory from Immortal Love.

Sasko provided Cumani a long-shot victory and punters pinned their hopes in stablemate Khoekhoe, sending the two-year-old out the $2.50 favourite in the Tom Melbourne Trophy.

After settling in the box-seat, Khoekhoe had clear running from the top of the straight but was unable to peg back Immortal Love ($4.20), going down by 3-1/2 lengths.

The victory aboard Immortal Love provided Newitt his first Saturday metropolitan success since relocating from Tasmania after racing in the island state was shutdown last month.

Mick Price, who trains Immortal Love in partnership with Mick Kent Jr, said it was good to see Newitt back in Victoria having success.

The pair teamed for numerous Group One victories before Newitt returned to his native Tasmania just over three years ago.

"He was there (at trackwork) this morning at 5am," Price said.

"He rode one after another for a couple of hours and he's going to all the meetings and riding well.

"I did say don't be in front at the top of the straight, not sure if he heard that or not, but the leader did faint.

"He's an aggressive rider and gets the best out of them and it suits my horses, I guess."

Price thanked owner Peter Creighton for listening to his advice and gelding Immortal Love with the two-year-old unbeaten in his two racetrack appearances.

"He wasn't going to be much good as a colt," Price said.

"I suppose that today is one of those days that if they're going to handle it (heavy) then they'll win. If they don't, they'll be out the back.

"It's fantastic to see we've got a wet-tracker." 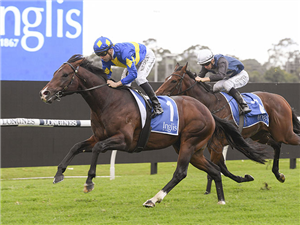