Begg and Rawiller to team up at Flemington

Campbell Rawiller gets an opportunity to cap his success in this season's Rising Stars Series for apprentices in Victoria when he rides Beauty Bolt for trainer Grahame Begg in the final race of the series at Flemington.

Rawiller, son of prominent Sydney jockey Nash Rawiller, is in his first season of race riding and has an unassailable lead in the points standings in the Rising Stars Series.

The series comprises 24 apprentice-only races around the state during the season, culminating at Flemington on Saturday.

Rawiller has already won three of the races and amassed 76 points, 16 more than his nearest rival Teo Nugent.

Saturday's Rising Stars Final (1400m) has a field of 11 and Begg is happy to have 19-year-old Rawiller aboard filly Beauty Bolt who carries 53kg after the apprentice's 3kg claim.

"It will be the first time he has ridden for me on Saturday but I've known Campbell from the time he was a little boy growing up in Sydney," Begg, who formerly trained at Randwick, said.

"I've been watching his progress very keenly over the last 12 months or so.

"Nash used to ride Our Egyptian Raine for me, so Nash had good success for me and it's great to be able to give Campbell the ride."

Begg has also booked the apprentice to ride Island Daze in another race on Saturday's program.

Beauty Bolt is coming off an unplaced finish in the Rivette Series Final (1400m) at Flemington but Begg is convinced the filly is capable of bouncing back on Saturday.

"I was very keen to get her down in the weights and it looked the ideal race, being an apprentices race, to be able to do that," Begg said.

"She has a significant drop in weight from her last start. She had 59.5kg last start and she will carry 53kg this time.

"She doesn't like being inside of horses but she has drawn out in barrier nine on Saturday so it gives her a good opportunity."

Beauty Bolt was equal favourite in an early market on Wednesday along with the James Cummings -trained mare Laburnum who will be ridden by Michael Poy. 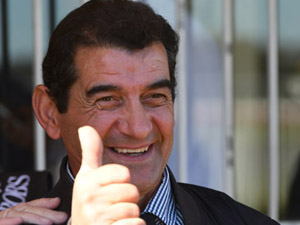