The Race History of the Sir Rupert Clarke Stakes run at Caulfield on Saturday suggests it is always a highly competitive sprint.

Exceed And Excel won this race as a 3yo. Will it be the younger brigade in the 2020 Sir Rupert Clarke Stakes (1400m) at Caulfield on Saturday?

The Sir Rupert Clarke Stakes is a Group 1 race run under handicap conditions for open class horses at Caulfield conducted by the Melbourne Racing Club.

The Sir Rupert Clarke Stakes used to be known as the Invitation Stakes but has had numerous name changes until settling on the current name who was former chairman of the Victorian Amateur Turf Club.

It has been at 1400m since inception.

Previously run on Show Day Holiday which was a Thursday, it is now on feature weekends. After being on Underwood Stakes day recently, it is now run a week earlier.

The Sir Rupert Clarke Stakes was a Principal Race until graded at Group 1 in 1979.

St Joel won the race three times but all of them three years apart twice.

Only mare winner in the last decade is Response in 2010.

Three year olds had a great run 20 years ago but none since Exceed And Excel.

Santa Ana Lane recorded his initial G1 victory last year and backed it up later in the season in the Goodwood and Stradbroke Handicaps and then won the VRC Sprint Classic the following Spring.

Godolphin's international arm had a plan to bring some quality horses to campaign in Australia in 2018 and G1 Al Quoz Sprint winner Jungle Cat was in that team. He sat wide under a big weight but James Doyle got him home by a nose.

Many horses run in this race and then the Toorak Handicap over the mile.

The 2019 Sir Rupert Clarke Stakes was won by Begood Toya Mother from Age Of Chivalry and Widgee Turf. 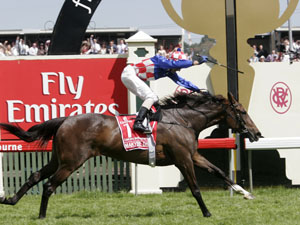