Hawkesbury trainer Jacqueline Greentree had a perfect excuse for not being trackside at Taree today when she clinched a new season breakthrough. Nursing a fractured tailbone from a spill when riding trackwork on one of fellow Hawkesbury trainer Brad Widdup's horses, she had to be content with "riding from the grandstand" at home when bargain buy Dicko's Mate  led throughout in the Class 1 Handicap (1400m).

And there's no doubt she did plenty of riding watching the TV as jockey Grant Buckley got the five-year-old home to land a long-priced coup.

Purchased online for only $3750 last month through Bloodstockauction.com, Dicko's Mate was having only his second start for his new trainer, and started at $15.

But Greentree and her husband Mark secured much more lucrative odds. "We got $61," she said this evening.

"Mark deserves all the credit. He was the one who was keen to buy the horse, and it has paid off.

"He took Dicko's Mate to Taree as I didn't fancy the idea of making the trip with a sore tailbone."

Dicko's Mate, a son of 2012 Caulfield Guineas winner All Too Hard, fetched only $6000 when he was initially sold to Newcastle trainer Rod Ollerton at the 2017 Scone yearling sale.

His sole win (aside from three placings) from 29 starts for his original trainer was in a Quirindi Maiden Handicap (1200m) in November last year when a $2.60 favorite.

Dicko's Mate was put up for auction after beating only one horse home in a nine-horse Class 1 Handicap (1500m) at Newcastle on August 13.

It took 24 bids before Mark Greentree secured the gelding online.

"We were on the lookout for another horse, having only the old bloke (nine-year-old Fioravanti) in work," Mrs Greentree said.

"The form around Dicko's Mate wasn't too bad, and he showed he still wanted to run.

"We had him scoped after we bought him, and all was clear."

Dicko's Mate had his first start for his new stable when seventh, after racing up near the lead, in a Benchmark 58 Handicap (1600m) at Scone on September 8.

"The jockey (Daniel Northey) who rode him that day said he found the 1600m too far, and to bring him back in distance," Greentree said.

Dicko's Mate earned the Greentrees $11,200 first prizemoney – aside from a nice betting collect – in defeating Manhattan Whirl ($10) and Could Be Loved ($21), making him a very cheap horse indeed! 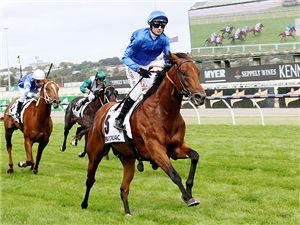