Saturday’s final feature race of the Belmont Park, will be named under the six-time Group One winner, Black Heart Bart.

Perth Racing is honouring one of Western Australia's most phenomenal, profitable and popular gallopers, Black Heart Bart, renaming Saturday's final feature race of the Belmont Park season after the six-time Group One winner, which pocketed nearly $5 million in prize money after Geraldton builder Kim Renner purchased him as a yearling for a paltry $20,000 at the 2012 Magic Millions Perth Yearling Sale.

Black Heart Bart won 17 of his 62 starts, including the 2015 edition of Saturday's $100,000 Listed event when it was the Birthday Stakes. This Saturday marks the first anniversary of Black Heart Bart's victory in the Underwood Stakes at Caulfield that elevated him to second place on the all-time ladder for Group One wins by WA gallopers.

"Black Heart Bart is, arguably, Western Australia's greatest living galloper, a bona fide champion of the turf, and Perth Racing is delighted to bestow this rare and prestigious honour upon him," said Professor John Yovich AM, Managing Director of Perth Racing.

"Since the introduction of Group One races in the 1970s, only the late great Northerly has won more Group One's for a WA ownership group than Black Heart Bart, Bart now has a Perth Racing event of his own."

"Black Heart Bart is a remarkable WA thoroughbred champion and it really all came together in his five-year old season in 2015 where he placed second in the Newmarket Handicap at Flemington Racecourse and the All Aged Stakes at Randwick Racecourse, before winning his first Group 1 race in The Goodwood, " said Kim Renner, Black Heart Bart Owner

"Bart then won his second Group 1 race in the 2016 in the Memsie Stakes and two starts later won his third Group 1 with a completely unexpected yet dominant 2.5 length win in the Underwood Stakes. I put on a few dollars on Bart for the win of course and was blown away with his ripper 100-1 victory. Two weeks later Bart took on the champion Winx after 11 straight wins, to finish second behind the champion in the 2016 Caulfield Cup," said Renner.

Saturday's nine-race Black Heart Bart Stakes Day meeting at Belmont Park will run from 12:18pm to 5:20pm. General admission to Belmont Park on Black Heart Bart Stakes Day will be free, just as it is for the final winter racing event on the Queen's Birthday race meet this Monday public holiday. Then it's all about the Ascot Racing Carnival, commencing Saturday 10 October, featuring The TABtouch Masters from November 21 – December 5. Whether it's a day out with the girls, a punt with the lads or fun with the whole family and kids under 18 free, there's something for everyone at the Ascot Racing Carnival where horseplay lives. 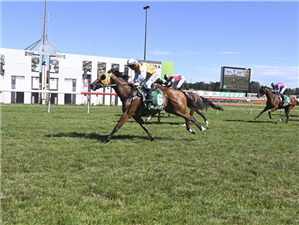