Special Reward about to “roll” with Aaron Bullock aboard

That will be Kris Lees' instructions to Aaron Bullock when he hops aboard Special Reward for Saturday's $1m The Hunter at Newcastle.

Lees is taking blinkers off the former Western Australian sprinter, and is anticipating a form turnaround.

Newcastle's leading trainer will saddle one-third of the 15-horse field in the city's richest race as he seeks to add The Hunter to his breakthrough Newcastle Gold Cup triumph with Mugatoo in September.

Whilst bookmakers are offering double figure odds about all five in a very open second running of the feature sprint, Lees has named Special Reward as his top pick, just ahead of Evalina.

Special Reward  has won eight of his 18 starts to date, and his trainer wants to use his tactical speed rather than hold him up.

"I put blinkers on him at his last run (10th to current The Hunter favorite Trumbull in the Group 3 Sydney Stakes (1200m) at Royal Randwick on October 17), and they didn't make a difference," Lees said this afternoon.

"Special Reward has freshened up nicely, and Aaron (Bullock) suits the horse.

"The 1300m is ideal. Special Reward easily won the Newmarket (1400m) here in the autumn, and has drawn nicely again on Saturday.

"We'll let him roll. There's no reason to hold him up, and he can definitely turn his last start form around."

Special Reward (Brenton Avdulla) had 57kg (0.5kg less than Saturday) in his Group 3 Newmarket victory in March, when he sat behind front-runner Desert Lord , and burst through when that horse veered wide on the home turn.

Lees considers Evalina with only 52kg is a knockout chance.

"She has raced well this campaign without a lot of luck," he said. "A firmer surface will suit her."

Tactical Advantage  also has a gear change, with winkers going on.

Lees is following a similar routine to last year when the gelding won at the Melbourne Cup carnival at Flemington, then returned home and ran second to Savatiano in the inaugural running of The Hunter.

Tactical Advantage didn't fire when eighth to Kemalpasa in the Group 2 Linlithgow Stakes (1200m) at Flemington on October 31, and his trainer has resorted to using winkers for another tilt at The Hunter.

"Hopefully they will spark him up," Lees said. "But there is a possibility he may not have come up this preparation."

Chief Ironside has also returned after two runs in Melbourne, having started this campaign with a third to Rock in the Group 3 Cameron Handicap (1500m) at home in September.

"The 1300m is probably a bit short for him, but I feel he can run a cheeky race all the same.

"El Dorado Dreaming is resuming and has had surgery since she last raced in March. She is a Group 1 winner with a couple of Group 1 placings as well, and any rain would help her chances."

. Lees has scratched a number of acceptors, but will still have two representatives, both resuming, when Canterbury's night racing season kicks off tomorrow.

Great Danger (Avdulla) contests the Benchmark 72 Handicap (1200m) for the "boys", and Think Free (apprentice Louise Day) tackles her own sex, also in a 1200m Benchmark 72.

"Great Danger is a good fresh horse (winning three from four first-up) and has had two trials to get him ready," Lees said. "It looks a strong race, but he gets his chance.

"Think Free has been a long time off the scene. I've been waiting for a dry track and a soft draw and she gets that tomorrow evening, but no doubt will take benefit from this run." 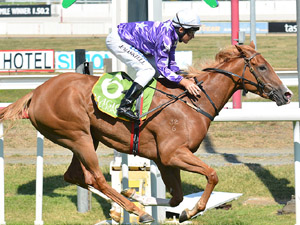