What a way for Allibor to break his maiden in the Group 3 Sandown Guineas. @Themodernpunter dissects the race. @DrinkWiseAus pic.twitter.com/JY4ZdLS4V8

"It was a reasonably good watch early, Dean gave him a great spin. It was a long straight and he needed every inch of it. Just so proud of the horse and proud of the team. That was a huge thrill.

"He was pretty stiff at Bendigo, he was just on the other side of the photo. It was a little bit of an afterthought (coming to) the Guineas. Condolences to the Hayes/Dabernig team. Obviously Aysar was going to be the one to beat. You need a lot of luck in the game, I suppose, and it was just on out side today.

"Just so rapt for Symon and the team. They work very hard in Warrnambool and Ballarat."

Blinkers going on: "He's such a laid back customer. He doesn't exert himself at all. Just the blinkers, we thought, might have made him a bit more tractable over the mile and it certainly put him a pair closer and it made the difference."

Soft spot for the horse: "I do. I know you're not supposed to have favourites but I have a real soft spot for him. He'll get an extra pick of grass tonight, I suppose."

"He ran really well at Flemington. They just ran too solid a tempo for him to tack on. Obviously it was scripted how good he finished his last furlong the way he picked off a few stragglers late. I don't think the mile was ever going to be an issue, just whether we still had the horse after last time.

"It was either put him in the paddock and get him ready for the autumn, but they stuck through with him and thankfully they stuck with me. They couldn't put anyone else on they liked. I just kept urinating in his pocket, to put it kindly, to Symon Wilde of course.

"It's good to get a winner for Symon. He and I have got a good solid combination going on and hopefully they continue to stick with me."

"My bloke was fully lost and still learning his caper, he's screaming raw. When I got there (to the front) at Bendigo he stargazed as well. Thankfully the second horse came to be a bit earlier (today) and he was able to go with him when he headed me and staved him off late. It was a really solid win and a great team effort."

Asked if the horse took a little to get going: "Not really. She ran well. The winner was just too strong for us." 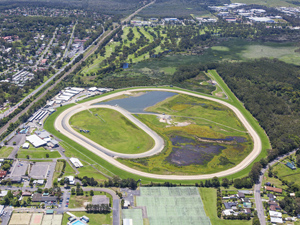