Tony McEvoy and his son Calvin are in the process of developing a new stable complex at the Ballarat racecourse to add to their existing property at Angaston in South Australia.

With the stable due to be ready to move into early in the new year, McEvoy senior would like to mark the event by capturing his 'new hometown' feature race, the $500,000 Listed Ballarat Cup (2000m) on Saturday with Game Keeper .

"We take over at Ballarat on January 11 which we are very much looking forward to so I'll be very happy to accept it (a win) as a local," McEvoy told RSN927.

McEvoy praised the Ballarat Turf Club for their effort that has gone into making the Cup the race it is on Saturday.

He said the prize money of $500,000 had contributed to making this year's edition a very strong race.

"I've got a horse called Winning Partner and I think this shows the depth of it," McEvoy said.

"He won the Murray Bridge Cup, the Balaklava Cup and ran a very unlucky race at Flemington and got balloted out of this race.

"I think the Ballarat Turf Club have done a great job.

"This was just a nothing little race a few years ago but it's really built now and looks like it will be a sought-after race in an extended spring carnival."

Game Keeper was being prepared for a Cups campaign, but those plans were shelved after the four-year-old failed to stay the 2500m journey of The Bart Cummings early last month.

His previous form had been solid and after a freshen up, Game Keeper came out to finish sixth behind Purple Sector in the Cup Day Plate (1800m) at Flemington on Melbourne Cup day.

"The horse that ran second held him in a pocket and he just had to wait until the race had gone and then his last 100 metres was fabulous.

"I think stepping up to the 2000 metres looks ideal for him and he's in great order.

"He's going to have a couple of days down at the beach this week and then he will be ready for his contest on Saturday."

With a capacity field of 16, Game Keeper has drawn barrier eight under Luke Currie and McEvoy said he would like to see the gelding ridden in the first half of the field.

"What he needs to be able to do is be the dictator and not be dictated to and that's what he couldn't do last start," McEvoy said.

The Ballarat Cup is a wide-open affair with Game Keeper currently a $23 chance.

Junipal , who landed his first stakes race win with victory in the Group 3 Sandown Stakes (1500m) last Saturday, steps up to 2000m for the first time on Saturday.

He has been well supported in early betting, firming from $6.50 to $5.50, displacing last start Group 2 Matriarch Stakes winner Affair To Remember  as top elect, a drifter from $6 to $6.50.

Group 1 winner Kings Will Dream  shares the third line of favouritism at $9.50 with fourth emergency Paradee. 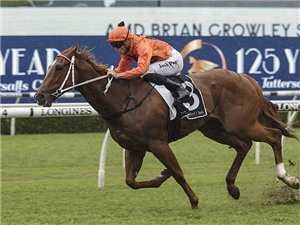 News Article
Updated 3 hours ago
Bowman to partner The Bopper in $1m Inglis Sprint on February
First-time blinkers are No Laughing Matter for the smart filly.
Preview – Hobart, Sunday 24th January 2021
'Sixth' Sense Says Locals' Best Chance Is Late In The Day (Goulburn Monday)
Randwick Winners - Tips For Saturday, 23rd January 2021
It's Not All About Setting The Pace For The Face
Garibaldi aiming for hat-trick at Doomben
New Colt Has Sears Excited
Plonka Back For Second Country Championships Bid (Grafton Sunday)
Sargent hoping luck can turn at Randwick