Spanish Point is aspiring to repeat history for Lees

Lees won last year's second running of the series with import Occupy  after he had won the Hawkesbury heat – and Irish import Spanish Point  became the first horse into the 2020 final when he took yesterday's opening qualifier at that track.

Because of the length of time between yesterday's heat and the final and the fact that placegetters cannot start again in any of the four remaining heats, Lees has decided on a plan to have the six-year-old gelding ready for early January.

"Spanish Point has done a good job, and we will freshen him up now," he said this morning.

"He'll have a week away at our farm at Ellalong, and I intend to give him one more run in a shorter race leading up to the Wyong final."

The second heat – another Class 5 at set weights but on this occasion over 1350m – will be run at Wyong on Thursday, and Lees has nominated Great Danger and Meyer, with the former his likely representative.

Today's Rosehill Gardens acceptors Safado  and Riva Capri have been withdrawn, and instead will line up at the $1m The Gong meeting at Kembla Grange tomorrow.

"Juventus is resuming and has twice won first-up previously, so it's not beyond him to be very competitive in what looks a tough race," Lees said.

"Safado cannot be dismissed either. He finally gets a good gate on a good surface and will be strong at the end of the 1200m.

"Riva Capri has taken improvement from one run back, but is going to need all the breaks to come her way in another very hard race."

On a relatively quiet day for Newcastle's leading stable, Iconic Star is Lees' only other Kembla representative.

"Iconic Star is a fast mare who won at The Valley over this trip in June against her own age (then a three-year-old," Lees said.

"She had a big weight (60.5kg) when she failed first-up on the Kensington track last month and comes down 3.5kg, and has since won an 845m trial at Wyong."

Lees' only other Saturday runner is Articus (Ron Stewart) in the Mooloolaba Cup (1600m) at the metropolitan meeting at the Sunshine Coast, but concedes the gelding faces a stiff task from an outside draw and is at long odds. 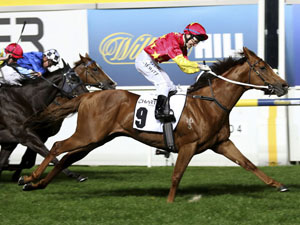