Chantry House  made his debut over fences a triumphant one in the Ascot Racecourse Supports Safer Gambling Week Novices' Chase at Ascot.

Last season's Supreme Novices' Hurdle third looked a natural on his first chasing start, running out a convincing winner of the two-mile-three-furlong contest.

Settled in behind the early pace, the Nicky Henderson-trained six-year-old had his task made easier when chief market rival Pic D'Orhy took a fall at the third-last.

Left with just outsider of the trio Up The Straight to beat, the 4-9 favourite only needed to be shaken up over the final two fences before crossing the line 26 lengths clear of his sole rival.

Henderson said: "He was having a really good blow. Nico (de Boinville) said coming out of Swinley Bottom he was taking his first blow. It's quite tiring ground out there. I was really pleased with his jumping. It was good and tidy, but you have to be a bit careful going down that hill with one first time out.

"Once he pulled him out and said 'come on, go for it' he was quite relaxed and warmed to it all the way up the hill.

"You need to be fairly sure of a horse to bring them here first time."

Assessing future plans for Chantry House – who is quoted at 12-1 for the Marsh Novices' Chase in March with Coral and Betfair – the Seven Barrows handler hinted a return to Ascot next month for the Grade Two Jacquart Noel Novices' Chase could be on the agenda.

He said: "He learnt a lot today and could come back here at Christmas.

"He certainly is not going to go down in trip and that was about ideal for now. One day he is almost certainly going to get further."

Buzz provided the Royal Marsden Cancer Charity with a financial boost after completing doubles for Henderson and De Boinville with a facile victory in the Coral 'Fail To Finish' Free Bet Handicap Hurdle.

Henderson said: "Thurloe Thoroughbreds have several horses in training, but with Buzz and a pair of two-year-olds 25 per cent of all the prize-money they win will go to the Royal Marsden Cancer Charity which is a fantastic gesture."

On the even-money winner, he added: "He loves that ground and he had run well at Ffos Las. With ours, it's funny – they are taking a bit of a race to get ready and there is a horse having his second run and it makes a big difference.

"We could come back here for the big handicap before Christmas or look at something at Newbury. He looked good there, but the race was run to suit him." 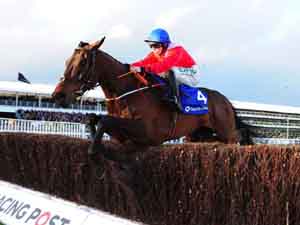