Star SA jockey Todd Pannell will reunite with Bella Vella for the $1 million Magic Millions Snippets race on the Gold Coast this Saturday.

Star SA jockey Todd Pannell will reunite with Bella Vella for the $1 million Magic Millions Snippets race on the Gold Coast this Saturday.

The pair combined to land the Sangster Stakes at Morphettville last year – the first Group 1 win for both Pannell and Adelaide trainer Will Clarken.

Pannell, who was the dominant SA jockey last season, said he was "thrilled" to get the ride.

Bella Vella arrived in Queensland last week and has since trialled ahead of Saturday's 1200m assignment, with Clarken confident of a strong showing.

"She's really thrived up there – she hasn't missed a beat," Clarken said.

"She's definitely better than she was at the end of the last prep. She might have trained off a little bit.

"She's carrying a bit more weight now… and hopefully she's in as good a form as we get her."

"I think it's all about drawing a barrier," Clarken said.

"Barriers are crucial in all races, but particularly in these high-speed sprint races where you have to conserve as much energy as you can in the early stages."

"Todd's done all the work on her," Clarken said.

"He rode her beautifully in the Sangster and he deserves a ride.

"He's also got a lot of friends up in Queensland... and we did it last year with another horse."

"She's fairly hard to place now because we've been fairly successful with her," he said.

"She needs to run in these sorts of races, because there wasn't a lot for her in Melbourne.

"It's not ideal, being first-up over six furlongs, but I've got a theory that she might get it a little easier being fresh over the 1200m.

Bella Vella joined the Clarken stable in mid-2019 after being purchased at an Inglis digital sale for just $22,500. 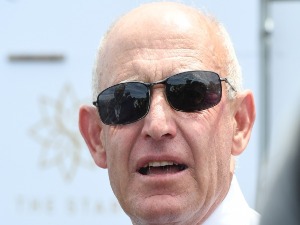