Gordon Elliott was on course for only the second time since testing positive for coronavirus to witness Percy Warner  claim a dramatic victory in the feature event at Fairyhouse on Tuesday.

The Cullentra handler was unable to travel to either Leopardstown or Limerick over the Christmas period as he had to undergo a period of isolation after contracting Covid-19.

He returned to the racecourse at Fairyhouse on January 3 and was back at the Ratoath venue for the track's latest fixture.

Elliott said: "I don't know how I got it (coronavirus). Everyone in the yard was tested and everybody (else) was negative.

"I've done my isolation. I had a couple of rough days – it was like having bad flu. I had no energy at all, but I'm fine now, thank God."

With Never Do Nothing and, more notably, the prolific Dreal Deal taken out, Percy Warner was one of just three runners who went to post for the Fairyhouse Racing From Home Webpage Hurdle.

Following an impressive chase victory at the track last month, Jessica Harrington's Sizing Pottsie was the 4-9 favourite – and everything appeared to be going to script for much of the two-mile contest.

The market leader was weary, but held a long lead on the run to the final flight, when he took a tired fall under Paddy Kennedy.

His exit left Percy Warner (11-4) and the Willie Mullins-trained Low Sun to fight it out and it was the former who clung on by half a length in the hands of Jack Kennedy following a ding-dong battle on the run-in.

"We were probably a lucky winner with the horse falling. I wasn't even watching the leader jumping the last, I was watching the other two," Elliott added.

"Jack said the leader was tying up very quickly going to the last. He said our horse probably needed more runners around him and a more competitive race. He was left in no man's land on his own. He's only had one run on the track.

"He's a grand horse. He was bought to be a chaser and that's what he's going to be. This was a nice race to win."

Duc D'Allier had earlier made a successful return from 949 days off the track in the Fairyhouse Supporting Local Business Beginners Chase.

Joseph O'Brien's 9-2 chance had not been seen in competitive action since winning a maiden hurdle at Clonmel in the summer of 2018 when trained by Henry de Bromhead, but proved he retains plenty of ability with an eight-and-a-half-length success under JJ Slevin.

O'Brien's assistant, Brendan Powell, said: "It was a good performance. He does everything right at home.

"He was in last year and was nearly ready to run when the ground went quick. He's a big horse and obviously had a few problems as it's June 2018 since he last ran.

"He's always jumped well and galloped well. It probably wasn't the greatest race in the world, but he can't do it any better than that."

O'Brien and Slevin doubled up with Fun Light (11-4) in the Fairyhouse Racecourse Maiden Hurdle.

Charles Byrnes and Kevin Brouder combined to land the Bar One Racing Supporting Irish Injured Jockeys Maiden Hurdle, with 2-5 favourite Light Brigade getting the better of Purdey's Gift by just half a length.

"It was a good opportunity as he was getting 8lb and he likes the ground," said Byrnes.

"He had things in his favour today as he was well-in. He made heavy enough work of it, but he won anyway.

"It's great to get the win out of him. He'll probably go handicapping now."

Trainer John McConnell was fined 3,000 euros, jockey Conor Walsh banned for 21 days and Tango Theatre suspended from running for 60 days after her fourth place in that race.

The stewards inquired into her effort and found the six-year-old had not obtained the best possible placing. 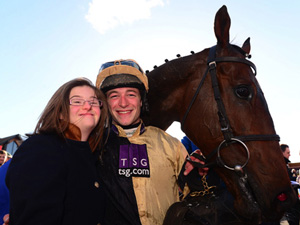