Sydney outsider Redouble will be shooting for a slice of Magic Millions Cup history twice at the Gold Coast on Saturday.

Sydney outsider Redouble will be shooting for a slice of Magic Millions Cup history when the gelding attempts to become the first sprinter to claim the $1 million feature twice at the Gold Coast on Saturday.

The Bjorn Baker-trained Redouble won the Magic Millions Cup in 2019 and finished second behind the Tony Gollan-trained Vega One last year.

Baker will also be represented by Edison - who will be ridden by Ryan Maloney  - while Michael Rodd partners Redouble.

In latest TAB markets, Redouble is listed a $34 outsider with Edison at $10 behind $3.70 favourite Yao Dash.

Baker is in line to join and elite group of trainers to win the Magic Millions Cup twice if Redouble or Edison are successful.

No trainer has ever won the Magic Millions Cup three times, but Baker can join Gai Waterhouse, Chris Waller and Tony Gollan who have lifted the trophy twice.

Now a seven-year-old, Redouble was also nominated for the $1 million Magic Millions Snippets but Baker felt the longer trip was more suitable.

"There's not much between them and blinkers are going on Edison which hopefully will put him right in the race," Baker said.

"He seems to thrive this time of the year and he likes the track, he's definitely not out of it again this year.

"He had barrier one when he won the Cup two years ago but he had the outside gate when he was beaten last year.

"This time he's got eight and you have to respect what he's done in the past."

Redouble was originally trained by Team Hawkes early in his career before joining Baker three years ago and has been in the stable before a brief stint when he was transferred to Mitchell Beer.

He had only two starts for Beer in two $1 million races when second in the $1.3 million Kosciuszko at Randwick last October before tailing off last in the $1 million The Hunter at Newcastle in November.

Since re-joining Baker's stable, Redouble has started only once finishing fourth to Edison over 1400 metres at Randwick in mid-December. 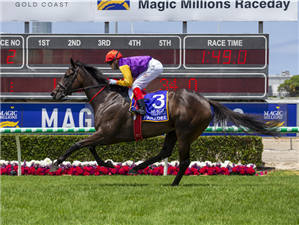