Le Gai Soleil Off To The Coast

First up since the spring, Le Gai Soleil produced a convincing success resuming in the Sky Racing Active Benchmark 78 3YO+ Handicap (1400m) at Warwick Farm.

"She is eligible for The Coast," O'Shea said.

"She is a four-year-old mare who will get a mile. It is a new race so as to what rating you need to win it or be competitive we're about to find out.

"She'll have a run before that and if she gets in she can have a burn around there for half a million. It will be a good race for her."

O'Shea has allowed Le Gai Soleil to gradually progress through her grades during eight career outings.

The considered placement has been rewarded with the mare accumulating five wins.

The Sky Racing Active Benchmark 78 Handicap (1400m) at Warwick Farm on Wednesday marked Le Gai Soleil's third midweek metropolitan victory and this prep will progress to stronger company, something O'Shea believes she is now ready for.

"She has got a great record," O'Shea said.

"It was a lovely soft run early and got the job done. She will come on a bit from that.

"She is about 20kg heavier this prep and doing well in the yard. She is effective on rain affected ground so hopefully she has a nice winter ahead for her."

Le Gai Soleil rounded out a winning double for the O'Shea stable at Warwick Farm after Blesk claimed the Pinatubo New To Darley Benchmark 72 3YO C,G&E Handicap (1600m).

Following the double, O'Shea has now moved up to sixth on the New South Wales Metro Trainer Premiership with 27 wins, edging past Team Hawkes and Team Snowden who both sit on 26 Sydney metropolitan wins for season 2020/21. 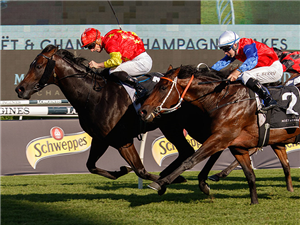