Lees' Doncaster arsenal reduced to one

Kris Lees will rely on Mugatoo in his quest for a first Doncaster Mile win after stablemate Gem Song pulled up sore following trackwork on Thursday.

Despite being down to one runner in the Doncaster Mile, Kris Lees has arguably his best chance yet to carve out a first for his famous Newcastle racing family.

His late father, legendary trainer Max Lees, was unable to win the Randwick feature and Kris Lees' best result to date has been a minor placing with Sense Of Occasion, who was third behind It's Somewhat and Happy Clapper four years ago.

"It has been an iconic race on our calendar for a long time," Lees said.

"I haven't had a great deal of runners. I've had a couple a few years ago, Sense Of Occasion ran third and that's probably our best result."

The Lees-trained Gem Song was scratched from the Doncaster Mile on Thursday after pulling up sore from trackwork, paving the way for first emergency Icebath to run after she was controversially left out of the original field.

Lees will now rely on favourite Mugatoo, who comes into the $3 million race after prevailing in an epic battle against Russian Camelot to win the All-Star Mile in Melbourne last month.

While the import is better known over middle-distances, he has responded well to a varied training routine and Lees is confident he remains sharp enough for what is widely regarded as a testing mile at Randwick.

"I've spaced his gallops and runs and kept him that little bit sharper for it," Lees said.

"With the four-week gap between runs and just a few other little things, it looks like this programs nicely for him.

"It's a Doncaster and luck will play its part but I'm pretty happy with where he's at."

Depending on how Mugatoo performs on Saturday, Lees has not ruled out backing him up against Addeybb, Verry Elleegant and Sir Dragonetin the Queen Elizabeth Stakes.

He said Gem Song's setback was not serious and hoped the horse might recover in time to participate in the Brisbane winter carnival. 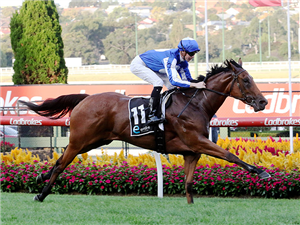