We look forward to an eight-race program at Devonport on Sunday culminating with Open Handicap over 1150m with just the five runners which is in contrast to the earlier seven races, almost all of which have full fields for us to analyze the form of and find some winners! Last Sunday we saw seven of the eight winners paying under $4.60 with the exception of Gee Gee Roy Boy at $6.50 making both the early and late quaddies fairly predictable which I think will again be the case this Sunday, therefore I'll be including my quaddie selections in our staking strategy this week. Last week winners were able to come from all parts of the straight, from differing runs in transit, and with good weather expected, it's fair to expect we'll see no bias again on Sunday. It must also be noted there may be a few jockey changes with some unable to travel from Victoria pending Covid lockdowns.

We kick things off in a maiden with a field often and I'm expecting Heavans Heartbreak to be setting the pace and put in an improved performance assisted by barrier 1. Freak on a Lead from the Brunton Stable only just missed at Hobart last start and this is probably one of the weaker races he's contested and should find a nice spot on pace from barrier 3. Jackjack made a promising return going down by only 0.3L at this track and distance last start but had drawn wide but we've seen horses settle midfield one off the fence and been able to wind up strongly with a clear run down the outside of the straight here plenty of times before which I think we'll see here. Needarein's recent form doesn't read too well but trainer Cameron Thompson has mentioned this gelding has had a trial and jump out and runs better fresh, his best recent result was at this track and the booking of Siggy Carr is a positive, he's one that represents value. Dadorable was impressive in her Tasmanian debut at this track behind a promising horse Scribbler last start and would only need a similar performance to be winning here.

Cheeky One should muster plenty of early speed which is crucial over the 1350m trip at Devonport with a short run to the first turn, missed by under a length last start and she'll find this much easier, top chance. Innocent Pegg has in form apprentice Codi Jordan aboard and comes through the same race as Cheeky One and should settle somewhere midfield off the fence. Tough Diva trialled okay but will be better over further. Hellot is first up off a 180-day spell and hasn't been seen on the Synthetic but being from the Brunton stable I'd consider it if any money comes for it.

Short N Regal nearly pulled off a massive upset at $101 last start in a race that had fast early sectionals, from barrier 1, and with Ianish Luximon's 3kg claim, she can run another nice race. The two interesting runners here are both from the in form Stevenson stable, with six wins each from King Island he's proven lately he's been able to improve tried horses under his care and I'm leaning toward the winner of this Class 1 coming from one of his two chances. Brahma Armour had no luck in a funnily ran race behind Short N Regal last start but from barrier 2 with an easier run in transit is worth another chance. We Need a Star was only 2.5L behind promising galloper High Maintenance and that form line reads well for this race.

This BM66 is probably the trickiest betting race of the night where I could make a case for most runners in this field. Michbar returned from a long spell with a nice win 1st up here 19 days ago, although this is tougher, from barrier 2 he can enjoy a cosy run behind the leader and put in another good performance. Sh'bourne Rebel is back from a 159-day spell and this is easier than the races he contested last prep, with good form at the track he is one of the main contenders. Silkstone will be our likely leader and if we put a line through her last start, looks a leading hope again with the 4kg claim. Artuso is 1st up but has great form at this track and distance. Trojan Storm only just missed last start by half a length behind Rising Hsiang who has strung a few wins together now and a similar effort would see him a place chance. Geegee Baywatch has been in consistent form and has shown good form with a win and two placings from its three efforts at this track and distance and has drawn barrier 1.

Distanza is back after a 205-day spell, looking to make it two wins from two starts and you would think the Adam Trinder gelding would handle the synthetic track. Ancona is 1st up and down in distance and will be a better betting option 2nd or 3rd up. Needs to Belong showed good form here behind Freelancer before winning and with Newitt aboard and barrier 4 should get a cosy run. Catch Me Paddy showed a good turn of foot last start but will likely be spotting the leaders a decent distance come the home turn. Silent Dreamer won well two starts ago here and had excuses last start but the booking of Siggy Carr is an advantage and can run into the placings. Seguimientos is aided by barrier 2 and if Troy Baker can be positive early the Brunton-trained mare is capable of a strong finish.

Red Fiore will likely go forward despite drawing barrier 13 and as usual bowl along ensuring a solid tempo, both the big gelding's win's have come at this track although were over the 1880m. Endured won 1st up off a short spell here scoring easily by 3.3L and the rise in distance will suit and will give itself every chance upon pace. 9yo Dylan Clarke trained gelding Son Of Faith continues to put in solid runs and will be well-placed midfield if the leaders go a little too hard early. Possession will take an improvement from his 1st run in the state and the rise in distance suits, look for a good showing 2nd up here. Signal Hill is coming off a good win and has been consistent and with the 2kg claim of in form Codi Jordan could sneak into the placings. Oneira should find a spot midfield with cover and is open to improvement. Magic Whaler steps back out to 1650m and if we put a line through his last run, his form prior to that would see him go close to winning here today.

Galway Girl showed how far she had come when running 2nd in the Devonport Cup and back to the synthetic 2nd up finds a much easier race although will appreciate further, she should find a nice spot behind a strong tempo. Date Night will use barrier 1 to its advantage, it's a short run to the first turn and looks the likely leader along with Invincible Rock. There looks to be plenty of early speed on paper to contest with, with Born Magic and The Master Speed drawn wide both usually racing up on pace and have been racing in tougher races than this. Sanction King has been super consistent and the 4kg makes him a chance also in an open race. Tactics will play a big role in this race with whoever ends up with the most economical run probably winning in a tough betting race.

Scott Brunton's 9yo Ruettiger is back for another prep and finds a winnable race to kick off in, has won 1 of his 2 starts here over the distance and although will improve over further is a key chance. It's hard to split the two Gee Gee's trained by Wells with most of this field coming through the same races but Gee Gee True Story has had their measure on recent form. O'Lonh Star will be the likely leader and if is allowed to dictate upfront without pressure could run into the placings. 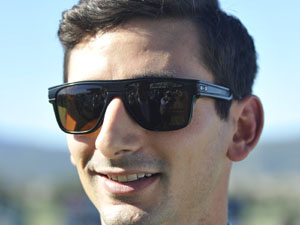