Leading apprentice Jacob Opperman’s impressive season in the saddle has seen his services sourced by Leon and Troy Corstens at Morphettville on Saturday.

Opperman will partner the Victorian duo's speedy filly Royal Obsession who comes to Adelaide for her first run back from a spell.

The daughter of Written Tycoon had jumped out smartly before her debut at Geelong last year when she led before being swallowed up the final 100m and Troy Corstens said the 1000m around the Parks looked ideal.

"She's got a fair bit of upside and hopefully getting a city win by her name.

"(Morphettville Parks) should suit her, had we drawn a gate I would have been a lot more confident, but she's got good speed early and I think she can get across.

"She comes in well at the weights with Jacob's claim and looking forward to seeing what she can do over there,'' he said.

Opperman, who has a busy book of eight rides, has ridden 53-1/2 winners in the 2020-21 including his breakout black type victories aboard Royal Mile in the Listed Port Adelaide Guineas and Group 3 Chairman's Stakes during the Adelaide Racing Carnival

He's ridden 17 city wins and boasts the third best strike-rate in town of any rider in the Top 10.

The Corstens stable have booked Jason Holder to ride Flying Award who resumes for the stable after tackling some big races in the spring when under the care of Danny O'Brien.

He was sent out favourite in the Caulfield Guineas Prelude before running down the track behind September Run in the Group 1 Coolmore Stud Stakes.

"He's on his way back form a throat operation and until you race them you're not sure how successful they are, but all the indications are good.

"I'm really looking forward to seeing what he can do on Saturday, I'll leave (tactics) to Jason (Holder), we'll just ride him where he's comfortable.

"I think it's really important for horses who have had a throat operation to keep them in a rhythm so where he lands, he lands,'' he said. 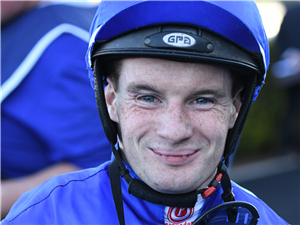