Savatoxl Set For Another Group 1 Tilt

Group 1 Goodwood winner Savatoxl has continued to thrive in Queensland ahead of Saturday’s $1.5m TAB Stradbroke Handicap at Eagle Farm in Brisbane.

The former top end galloper has taken no harm from a rough and tumble Kingsford-Smith Cup when he finished sixth behind Vega One. The ride saw jockey Barend Vorster suspended for 10 days.

"He's trained on well, had one sharp bit of work a few days ago and we're hoping for a good performance again, he said.

Despite shying at the horse inside during the Kingsford-Smith Cup, McEvoy said they were more than happy with Savatoxl's latest effort. Ultimately, this led to him causing interference, before regaining momentum and picking up again on the line.

"I thought it was a good run,'' McEvoy said.

"He has a tendency to lay whichever way the rail is, he was probably a bit lost and has been doing all his work on that leg.

The main obstacle for Savatoxl is a sticky barrier, drawn in 13, given the horse only knows one way and that is to search for the rail early in his races.

"He loves the rail.

"He's pretty one dimensional, he's not a horse you can really hold up,'' McEvoy said.

"So Barend will just come out on him and work it out,'' he said.

Savatoxl is one of the outsiders at $31 with tab.com.au in an open feature. Vega One holds favouritism at $5.50. 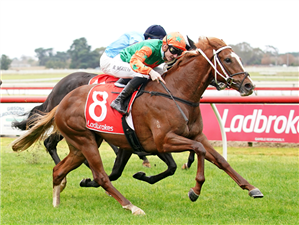