Away from the bright lights of Group 1 glory throughout her record-breaking career, Kiwi superstar Melody Belle has developed an inseparable bond with strapper Ashley Handley.

As trainer Jamie Richards and regular rider Opie Bosson are busy back across the ditch with their day-to-day duties, Handley will often take on the Australian trips with the 14-time Group 1 champion.

It is Richards, Bosson and the gun mare who get the plaudits on race day, but when Melody Belle does come across to Australia, it is Handley who is there to ride her in the morning and take her for a pick in the grass of an afternoon.

The pair travelled up from Sydney to the Gold Coast this week, basing themselves at Brian and Daniel Guy's stables at Aquis Park, ahead of the Group 2 TAB A.D. Hollindale Stakes, a location they will likely remain at until the Group 1 Doomben Cup later this month.

While the majority of Melody Belle's Group 1 glory has occurred on her home tracks across the ditch, she is a regular in Sydney, Melbourne, and Queensland and that is exactly where Handley has built her bond.

As Handley and Melody Belle enjoyed their afternoon stroll on Thursday, the Kiwi track work rider and strapper could not help get emotional when she thought about the prospect of the curtain closing on the sparkling career of "Valerie", as she is affectionately known.

"She is quirky but she is a good quirky, she makes the day definitely enjoyable," Handley said with a smile.

"I get her over in Australia, which is great, you get to know them well and all their quirks.

"They look forward to seeing you, hopefully, in the mornings and in the afternoons, it is good to have the bond with them.

"You do not get horses like her every day."

Melody Belle has brought in over $4 million in prizemoney for her connections and would draw level with legend Black Caviar if she could add one more Group 1 to her resume during her Queensland stay.

The champion of New Zealand racing is in the Sunshine State - where she first announced herself as a star way back in 2017 - for her two final career runs, before heading to May's Magic Millions National Broodmare Sale.

From Richards, Bosson, Handley and Fortuna Director John Galvin, who owns the star mare, there is mixed emotions around the upcoming end of her stunning career.

"It is definitely exciting and a lot of emotions going around, excitement and anticipation and sadness - all sorts," Handley said.

"It is going to be good but I will be sad to see her go."

Bosson also said there would be plenty of emotion over the next few weeks.

"It's a really big thrill for me to get back on her and ride her in her swan song," Bosson told The Courier Mail earlier this week.

"She just had a nice quiet trial to prepare for Saturday and one thing I can say about her for sure, you can't underestimate her."

Galvin described Melody Belle as an absolute life changer for her connections.

"For her ownership group and for Fortuna it's been an incredible ride," Galvin said.

"Many of Melody Belle's New Zealand owners are based in smaller towns and hamlets and all of the owners have become well-known in the community and she has really become the people's horse.

"She has such a huge following with so many people knowing and supporting those who have a share in New Zealand's champion."

"We are very lucky to have her here on the Gold Coast, she is a wonderful mare and has been for a long time," Brown said.

"I think it is a great touch that she is coming back to the TAB Queensland Winter Racing Carnival after she tasted black-type success in 2017.

"She has 14 Group 1s, one more than Sunline, who was a personal favourite of mine.

"We love to see heroes of the turf and I am sure the punters will be excited to see her on Saturday.

"It is great for the club as we are trying to build up the Hollindale Stakes to hopefully become a Group 1 in the future, with the field of Group 1 standard this Saturday with all the quality horses that are in on Saturday.

"Melody Belle only adds to that with her amazing record, it is great to see a horse of her ability here."

The now six-year-old mare has been in Australia for some time now, running four lengths behind the winner in the Group 1 Tancred Stakes in Sydney last month, before having a trial to keep ticking along.

Handley says Melody Belle knows the game better than the stables staff these days, making it easy for everyone to transition from New Zealand to Australia.

"It has been good, everything has been pretty normal as she has done it quite a few times now," Handley said.

"It is routine for her and makes it easier.

"I have been in Sydney for a little while, she has been here for about two weeks, she had the run and then the trial and just kept ticking over.

"The trial was just for her to have a go around."

Melody Belle has drawn the widest alley possible for Saturday's feature, but Handley says she will try her heart out regardless of barriers.

As of Friday morning, Melody Belle is rated by TAB as a $7 chance, with Avilius the $4.80 favourite. 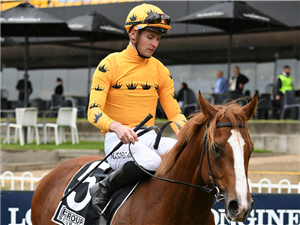