Mostahdaf  could have booked himself a ticket for the Bahrain International Trophy on November 19 with his impressive display at Newmarket last week.

The John and Thady Gosden-trained three-year-old took his impressive career record to five wins from six starts in the Darley Stakes.

His sole defeat came in the St James's Palace Stakes and while Saturday was his first race over further than a mile, John Gosden feels 10 furlongs could bring out even more improvement.

He said: "Mostahdaf hasn't done a lot wrong. He got boxed in during the St James's Palace Stakes and that was the end of it.

"We've always thought of him as a 10-furlong horse. His half-sister (Nazeef) won two Group One races at a mile. She was by Invincible Spirit, and he is by Frankel, so we are pretty confident a mile and a quarter is his best trip. He is a classy horse.

"There is the Bahrain International Trophy as an option in November, but we will talk about it with everybody, and we will see how we want to play it"

Mostahdaf is one of 78 entries from 10 different countries. Other standouts include Group One winners Thundering Nights, Barney Roy, Desert Encounter and Lord Glitters. 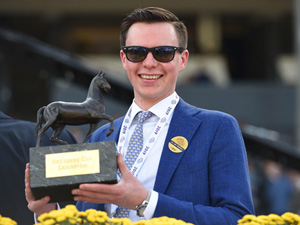