When the going gets heavy, Heza Gentleman gets going!

Relishing another wet track last night at a Canterbury Friday night meeting, the tough five-year-old gave Hawkesbury husband and wife training partnership Mitch and Desiree Kearney their fourth city success – and all have been with him.

Cleverly ridden by apprentice Tyler Schiller, Heza Gentleman  ($6) revelled in the heavy ground to bolt home by more than three lengths in the Benchmark 72 Handicap (1550m).

He beat $41 roughie Lucky To Win, whilst heavily-backed $1.45 hotpot Cross Talk struggled into third placing after attempting a barrier to box victory.

It was only two years ago that Heza Gentleman broke through for his first win in an 1100m Maiden Plate at a non-TAB fixture at Mudgee.

"His improvement has been remarkable," co-trainer Mitch Kearney said today. "And he seems to be getting better with each run this preparation.

"He is such an easy horse to train, and absolutely lives up to his name.

"Importantly, Heza Gentleman is handling his racing so well. He ate up last night and was very bright this morning.

"Whilst he is in such good form and the rain stays around, there's no point giving him a break."

Heza Gentleman, a son of Nicconi and Kearney's first ever winner Silk Spun (at Hawkesbury in July, 2014), has now won six races (along with nine placings) for earnings of just over $170,000.

There is surely some irony in the fact that five of the gelding's victories have been on either soft or heavy tracks as his dam's solitary win was on a "Firm 2" surface.

Schiller, who was also aboard Heza Gentleman when he led throughout in a similar race as last night, but on a "Soft 7" a fortnight ago, had been keen to adopt similar tactics again.

But he wisely took a sit when Tim Clark was just as keen to lead on former New Zealander Cross Talk, who had scored easily on heavy ground at his Australian debut at Hawkesbury on November 4.

"Tyler gave Heza Gentleman a brilliant ride, and he didn't seem concerned before the race either about the favourite," Kearney said.

"He rode in the same race Cross Talk won at Hawkesbury, and doubted the strength of that field coming into a stronger city race."

The Kearneys now have a pleasant problem deciding where Heza Gentleman will attempt a city hat-trick.

"There is the Evening Star (Benchmark 78 Handicap, 1550m) at the next Canterbury night meeting on Friday week, and a Midway (Benchmark 72 Handicap, 1600m) at Randwick the following day," Kearney said.

"It will largely depend on how the RacingNSW handicapping panel treats him after last night's win as to where we go."

Heza Gentleman had a 65 rating – up four points for his Canterbury win on November 12 – going into last night's race, and undoubtedly will get a similar increase for his latest success. 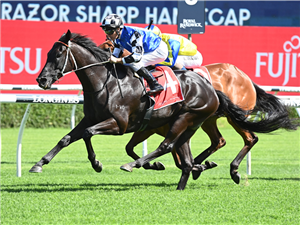