TRAINER John Blacker could aim his handy filly Magic Typhoon at a race like the Thousand Guineas following her impressive maiden win over 1200m at Elwick on Sunday.

Magic Typhoon ($10) went into the race on the back of a second to promising three-year-old Peace Be Upon Him in Launceston over 1220m and she took that form and more into this latest assignment.

In-form apprentice Tayah Stalker had the Last Typhoon three-year-old filly settled in advance of midfield and on a piece of cotton as the field entered the home straight.

"I've been really pleased with this filly's recent efforts, and she's been a bit unlucky not to win a race before now," John Blacker said.

"She was very well ridden today by Tayah Stalker (Stalker), and it was her first ride for me, but it won't be her last.

"The filly has really come ion in leaps and bounds and I might head her to a fillies' feature or two and maybe the Thousand Guineas."

It was a well-judged ride by apprentice Brandon Louis who allowed the five-year-old son of Chrome Magic to relax and find his feet and 400m out there wasn't another horse punters wanted to be on.

Techno Awards kicked two lengths clear turning for home, but Moshama knuckled down to his task over the final 200 metres to go on and score by almost a length.

"Further down the track I think he could be a cups horse because he is a genuine staying type that has only just started to be a racehorse.

"That's only his 14th start and his second win, but he'll get better with time and I'm quite confident he will measure up." 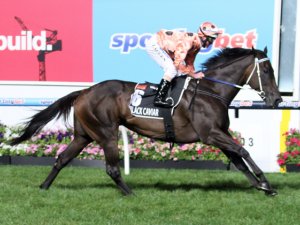