Peter and Paul Snowden have gone back-to-back in the Magic Millions three-year-old Guineas as King Of Sparta mowed down his rivals to win the rich $2million feature.

After winning the 2021 renewal with Aim, they returned to the scene of the crime with the son of I Am Invincible, who was finally able to capture that elusive black type victory.

The three-year-old was well-supported late in betting, eventually jumping as the $4 favourite with Nash Rawiller having his first ride aboard the King Of Sparta.

"He's always been a horse with an immense amount of talent, but he always used to do so much wrong in his races and be his own worst enemy," he said.

"Today, Nash, it was the first time he sat on the horse believe it or not.

"Those sorts of things that you need to introduce in time, obviously a new rider on the horse and you'd like to get that little bit of bond and knowing where he's at.

"I was filling Nash up with plenty of instructions let me tell you.

"Thankfully, there was always going to be good tempo on and we got into a lovely trailing position midfield where we wanted to be, and he was much too good.

King Of Sparta got away well from his wide barrier and was able to find cover in the three-wide line, settling about midfield.

Rawiller sat patiently atop the gelding as he got a lovely cart into the straight, peeling into clear air at the top of the straight before asking for maximum effort with 250m left to run.

The three-year-old showed a dashing turn of foot to take the lead with 125m remaining and was strong to the line to by over a length.

Rawiller was very impressed with the gelding's performance and hopes to stick with King Of Sparta into his autumn campaign.

"He jumped super today and I thought early that I was going to get too close," he said.

"Then when he did drop it (the bridle) for me, I was starting to get a bit out of my ground.

"He still raced a little in patches, but what he's got under the hood is a bit of a Ferrari engine.

"He still hasn't used it to his advantage 100 percent, but not many horses let down like that, that was very impressive.

"I think he's got scope. I've never sat on him, but you only have to see him in the mounting yard to know that you're getting on a horse that's pretty special.

"I think little wins like this will help his confidence and bring him right on for the autumn.f

"I hope I can stay with him that's for sure, he's really exciting."

King Of Sparta beat home another well-backed runner in the locally trained mare Me Me Lagarde and $26 chance Socialist.

Early favourite Jamaea didn't get a chance to show her ability, finishing a luckless seventh. 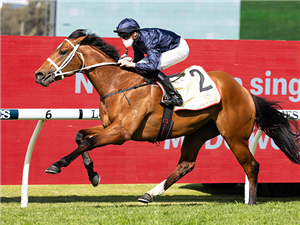