Chris Scholtz reviews the Gosford and Rosehill barrier trials on August 5 and 6.

More big names appeared in the two 1000m heats for the Group horses with some nice efforts from AVILIUS, SPECIAL MISSILE and UNFORGOTTEN in the slow heat (62.40; 36.20), while SAMADOUBT took control in the second heat and ran along to win by a big margin in much quicker time (60.10; 34.80) with none of the others asked to do any serious chasing. Liked the way Oaks winner VERRY ELLEEGANT got into her work late to run strongly through the line.

Golden Slipper winner KIAMICHI did her thing to lead all the way for an easy win in her 1030m heat on the inside grass in 63.17 (35.30) while stablemate OSBORNE BULL could not be missed steaming home from the rear for fourth in his 900m heat won in slow time by a classy new Godolphin import WREN'S DAY (55.66 (35.00). BEAU IDEAL was another Godolphin import to make an impression under an easy ride for third in the strong heat won by BROKEN ARROWS (55.26; 34.80).

.@godolphin's superstar Avilius with @blake_shinn aboard was very impressive beating a top class field including, Unforgotten, Patrick Erin and Special Missile in the Group and Listed trial @rosehillgardens this morning .. The spring is looking good for the 'Blue Army'! pic.twitter.com/adOTnUwbgO

Golden Slipper heroine Kiamichi has cruised home to win her trial @rosehillgardens this morning. @blake_shinn did not move on the @godolphin flyer who is heading toward the Golden Rose on Sept 28... pic.twitter.com/Q26Yj6rjp2

What about this trial from Osborne Bulls! @godolphin's Wren's Day took the honours but @HugeBowman had a massive grip on 'Osborne' as they flew home in this morning's @rosehillgardens trial ... Nature Strip was a pretty handy effort as well @cwallerracing. pic.twitter.com/6tiQYyhvq1

Trope (Team Hawkes): There were a host of good trials in the classy heat won by WREN'S DAY but none better than the soft fifth by this lightly-raced 4YO. He was last into stride and settled quietly in the back three where he was cuddled by Brenton Avdulla until the last 200m where he got clear air to work home under an iron grip beside the top class sprinter OSBORNE BULLS. It was an effort that augers well for his spring prospects.

Dyslexic (Team Hawkes): Talented mare on her day showed she is set for another good prep with her strong second under a very quiet ride from Tommy Berry in the 900m heat won by Broken Arrows. Her last 200m was excellent and points to her being ready to produce first-up, being at her best when fresh.

Yes Yes Yes (Chris Waller): Doubt he was out to win his heat but his second in the fastest 900m heat won by HUMAN NATURE (54.49; 34.60) underlined his talent. He was locked away behind the leaders until the last 100m before it opened up and his class was evident as he surged quickly to close the margin on the winner without being let go. He could be a real spring star.

Golden Rose nominee Human Nature for @HawkesRacing looked good winning, and #TheTABEverest hopeful Yes Yes Yes, for trainer @cwallerracing, got out late and was hard to miss in this morning's @rosehillgardens trial... pic.twitter.com/KisvqrKgFX

''HE NEVER GOT OUT OF SECOND GEAR'' - Jockey @blake_shinn liked what he saw from Yes Yes Yes @cwallerracing at the @rosehillgardens trials this morning. Will he be a #TheTABEverest horse come Oct 19? pic.twitter.com/ZGAoTIn7HQ

Some big names appeared in the first 800m heat won by OAKFIELD TWILIGHT in the quickest of the 11 heats over the trip (49.56; 35.01). All eyes were on REDZEL with his second, notably without blinkers, just a pipe opener for what lies ahead with Kerrin McEvoy content to sit second a length off the winner and allowing the dual Everest winner to close within half a length at the finish under no pressure.

The big trials behind him came from the classy pair VEGADAZE and GRAFF with their efforts indicating they are coming in fine form for their spring campaigns. IN HER TIME as not asked to be competitive and take this as no more than a conditioning trial.

In the only 1200m heat GOATHLAND impressed by the way he came from the rear to run down the smart WOLFE with both looking well prepared to resume. BALLER was another to make a strong impression with his second in his 800m heat while VERSETTO was impressive easily winning by a big margin in the quickest of the 1000m heats (61.60; 35.96) in his first trial for 12 months.

A star-studded trial @gossytrack this morning saw Oakfield Twilight win, but Redzel, Miss Invincible, Vegadaze and Graff all looked super. #TheTABEverest is on Oct 19 @royalrandwick and the spring preparations for these horses is now officially under way! pic.twitter.com/wzjvhCAXit 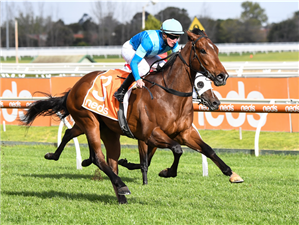