The Lee Freedman trained Mr Dujardin did enough first up to suggest he can prove hard to beat in the seventh event at Kranji on Sunday.

Although never really in the hunt first up when favourite, his performance was still rock solid and he should relish the step up to 2200m.

A winner of three of his 21 starts, his racing pattern (backmarker) has cost him with six minor placings.

Often a sectional star, Mr Dujardin certainly has the talent to be winning at this level (Class 4) and the booking of Duric is a big a push as ever.

When combined with Freedman he is striking at 20% and it's always a big tick when doing your form.

The wide draw likely sees him settle back in the field, however he has the ability to overcome this hindrance.

The Dan Meagher trained Touch The Clouds was on the improve last start and has to be respected with Rodd booked.

In three attempts over this trip he has never missed the money and rates well on best form.

Much like Mr Dujardin he is expected to settle back in the field, but with even luck from the inside draw, he should prove very hard to hold out.

The Ricardo Le Grange trained Mighty Emperor continued his good run of form last start and has to be included in the main chances.

Although only placing in 2/26 on the turf track, he rates well and gets in very well after the claim.

On trial at the trip, but has been finishing fast over the shorter trips and trust in Le Grange to make the right call.

Of the rest, it's hard to ignore the much in-form Pakatan Warrior.

A winner of his last two starts he makes the rise to Class 4 company and has to overcome his poor record on the turf track. 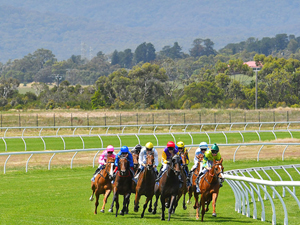