Rifle shooter Dane Sampson says he is more confident and consistent compared to 2018, when he won gold at the Commonwealth Games on the Gold Coast.

Gunning for a third Olympics, 2018 Commonwealth Games gold medallist Dane Sampson expects this selection process to be the toughest yet.

It was the same event he won at the Commonwealth Games.

But the Queenslander, who moved to Adelaide following the 2012 London Olympics to develop his craft in the same city that Shooting Australia's headquarters are based in, is now locked in a selection shootout with local rivals.

Shooters will take part in four selection events in coming weeks, with their three best scores counting on the leaderboard that will determine who claims the quota spot.

The process culminates in a final trial for all shooting disciplines that starts in Sydney on March 18.

"I feel good and a few of the boys are shooting really well as well. I think it'll be a closer selection than it has been in the past," Sampson told AAP.

"The last two Olympics have given me really good experience to know what to expect.

"I've learned quite a lot. Not just from the two Olympics but everything between. I'm a very different athlete now than I was going into London.

"I'm obviously much older, more mature and more settled. I know more about myself."

The 33-year-old, who works as an antique restorer in his downtime, won 10m Commonwealth gold in 2018 then finished fourth in the 50m prone event and eighth in the 50m three-position event at that year's world championships.

Sampson will draw confidence from those high-pressure performances.

"I was the first Australian to ever be in a 3P final at world champs, so that was another huge achievement for me in that year," he said.

"And since then my level has really jumped up and stayed at this high level.

"I was able to build from that and get better and better, more confident and more consistent in international competitions." 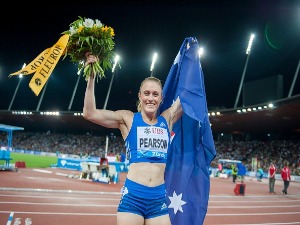