Racing and Sports highlight our standout plays for Australian TAB meetings on May 29.

Dynamic Thinker and Forza may make the speed. FISTICUFFS (6) brings a series if strong rating efforts and was beaten a lip here 13 days ago. Closes late and the 1400m is the right progression. Needs a good ride but gets 2x winning rider Fradd today and the gelding rates to win this for a top yard. ALPENDURADA (7) won the 62 and then missed a whisker at Doomben in stronger than this. Draws well with Byrne up and is a serious player each way. CANAPES (1) had no luck the latest, but was beaten a lip the previous two with the latest at Doomben in stronger than this. Peaks now and will go well from the handy gate. WATCH THE CAT (5) has to come back in trip, but is worth consideration with the claim and gear tweaks. SELECTIONS: #6 Fisticuffs should be winning.

Princess Sunlight should work across from the deep. PRINCESS SUNLIGHT (3) resumes from a break. She's trialled sharply on two occasions in readiness for this. Her race form from last preparation was also very good. All things point to a bold performance from the daughter of Time For War. She may be too nippy for this lot. ARCHERY BUTTS (1) has been gelded. Two runs in Victoria last time in were sound. He was in the market behind the likes of Sebrakate & Sizzlefly, which is an indication people know he has ability. Big watch. HONEY GO LIGHTLY (5) has been down the track in both career runs at Randwick. Bound to find this easier and she's trialled well. KEY LARGO (2) best of the remainder. SELECTIONS: Princess Sunlight gets the nod.

Flight Commander will run them along. THINK STRAIGHT (1) was strong to the line when third at Kembla Grange last start. He is an enigma but rates well if he can apply the same intent late in the race as he did there. AUSTREET (2) is racing in fine form this time in. Beaten by the barrier when shooting for the hat-trick of wins at Moruya most recently. Creeping up in the weights but deserves it. Will have admirers. COLESBERG (3) is hit and miss. Win two back at Muswellbrook would have him in the mix. FLIGHT COMMANDER (5) should give them something to catch on the pace whilst BLUE TATTOO (7) has had his chance here his past few but been solid enough. SELECTIONS: Think Straight in a tough end to the card. Backing to win. 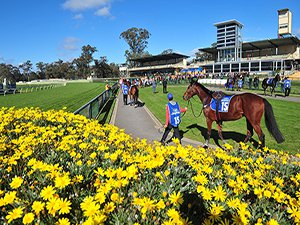