Supercars championship leader Scott McLaughlin says the Ford-Holden rivalry is "always simmering" after a dramatic end to the Townsville SuperSprint.

Even in Holden's dying days, the red lion's famous Supercars rivalry with Ford is still "simmering" away.

There are only three rounds to go, including the Bathurst 1000, until the Holden brand is retired by General Motors at year's end.

With Scott McLaughlin in the box seat to claim a third-straight championship, it doesn't appear Holden will bow out with a title.

But Red Bull teammates Jamie Whincup and Shane van Gisbergen are taking the fight to McLaughlin after a dramatic end to the Townsville SuperSprint on Sunday.

Van Gisbergen's season sprung to life as he won the final two races of the round - his only triumphs in 2020.

But it was the 31-year-old's bold overtaking move with four laps remaining in the final race of the weekend which infuriated his fellow New Zealander.

McLaughlin called van Gisbergen's tactics "pretty average" and just wanted a "fair battle" after finishing third and being denied his 11th win of the season.

The championship leader went further in the post-race virtual press conference and noted some confrontations from Sunday.

"We've banged doors for a number of years," McLaughlin said.

"I knew Shane had plenty of pace on me and he was going to get me eventually but I would have just loved to have had a ding-dong battle with Jamie... that was taken away by the team game.

"It's (rivalry) always simmering, it's obviously still in their minds, so we got the win and we're really proud of that achievement, of the championship last year and how we got it.

"You like to have a battle all the way to the end... obviously we're going to disagree from time-to-time and that's motor sport."

Van Gisbergen believed it was a "fair pass" that secured his 38th career victory.

"(McLaughlin's) spitting chips about that one, as you would, I guess, but I'm just doing the team thing and helping Jamie to get through as well," he said.

Despite the run-ins, McLaughlin said he will leave Townsville satisfied after claiming the round win - he took out Saturday's race.

"I won the round so that's a full stop for me," McLaughlin said.

"I was just more frustrated I couldn't have a go in a one-on-one battle with Jamie."

McLaughlin has a 143-point lead over Whincup in the championship standings before heading to Tailem Bend in South Australia for races on September 19-20. 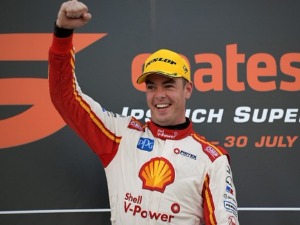