Strong N Powerful To Bounce Back In The Cup

It can pay to be forgiving in this game and happy to do exactly that with the Leticia Dragon trained Strong N Powerful.

A game third behind Inferno in the Group 1 Singapore Guineas [1600m] two starts back, he subsequently failed when stepped up to 1800m last start.

Nothing could be made of his subpar performance, but  prepared to stick with him as he looks to get every chance down in the weights.

Don't think he loved the wet track and it's a big tick with Van Der Merwe back aboard.

He's placed in all six attempts aboard the four-year-old including three of his four career wins.

A model of consistency (prior to last start), Strong N Powerful has placed in eight of ten attempts on the turf track and has always given the impression he would be better beyond a mile.

Worth nothing the nose roll went on last start and now comes off and he is expected to be a lot more prominent from the inside draw.

Prior to his last start failure he had been building nicely this preparation and certainly expect the Inferno form to stack right up.

Lightweight on-pace runners have a decent record in the Cup and with even luck expect Strong  N Powerful to be in it for a long way.

The Michael Clements trained Top Knight has history against him, but is still very hard to knock following his impressive last start win.

Adopting his customary position towards the rear, Top Knight couldn't have been more impressive in the run home, sprouting wings down the outside to win easily in the QEII Cup [1800m].

He returned a new career peak, rated 108 by Timeform and should be even better at 2000m.

Giving weight away to a few handy rivals is his biggest obstacle, but leading rider Vlad Duric sticks aboard and he is sure to be hard to hold out.

If successful he would be the first horse in almost 20 years to carry more than 56.5kg to victory.

His regular sparring partner Aramaayo meets him slightly (1kg) better at the weights and does boast three wins over the star five-year-old.

While closing off well behind Top Knight he was no match late, but should appreciate getting back onto firmer footing.

The Baertschiger stable is in good form and he looms as a major threat.

Of the rest the Lee Freedman trained Minister appears the next in line, having finished second behind Top Knight last start.

He now meets 2.5kg better off and appears capable of turning the tables, he should be on-speed from the outset. 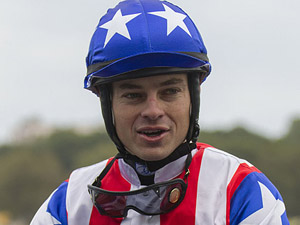