Solid tempo with Time Raid and Bobby Dee expected to stride to the lead. HARPO MARX (5) turned in an encouraging run first up, settling well back and chiming in late to finish fourth at Hawkesbury over 1600m. Disappointing last prep but has been gelded and looks to be in the right frame of mind now. Will be hard to hold out over more ground this evening. GLAMOUR FOX (4) made considerable ground to finish third at this track and trip last time out. In-form mare who finds a similar essay this time and another bold showing is expected. KUTAYHA (6) has been in good form, scoring three back at Newcastle then registering back-to-back placings, most recently finishing second at this track and trip. Major player for the Waller/McDonald combo. BOBBY DEE (1) led but faded late last time over 1850m at Newcastle in a metro Saturday quality race. Will find this a shade easier so worth following up.  SELECTIONS: #5 Harpo Marx to open his Aussie account at a nice quote.

Looks a strong tempo as Vungers, Bezos and Our Dreamsarefree pressing on. COMING AROUND (1) finished midfield last start at Flemington over 1400m, peaking on his effort late in the piece. Was off a seven week break there and that can bring him straight back to his top. He was in terrific form over the winter and has the ability to beat these in what looks a bit of a target race for him. VUNGERS (6) was in a different class last time with a dominant all the way win, scoring by 3.5 lengths at Donald over 1620m. Absolutely flying at the moment, running good times, and obviously a key player here. STROME (5) missed the frame but not disgraced in town when ninth in the G3 Summoned Stakes at Sandown-Hillside. She should run well against these. SPANISH STEPS (2) was never in contention when resuming over 1600m at Flemington but has talent and could be a sharp improver. KEN'S DREAM (4) next best. SELECTIONS: Coming Around is good enough to beat these.

Intueri may be the one to run them along. SUPREME POLARITY (6) races at peak fitness for a sharp local stable and brings very strong figures this trip. Was just nudged out twice at Kembla Grange, before the 1L defeat in the rich Open at Gundagai. Draws for a soft on-pace run and rates the one to beat. SCARLEO (14) just missed 12 days ago behind the stablemate in the Federal at 70 level and didn't have the best of it over the mile. Has won 2/3 at the 1400m and keeps McDougal. Will go close for the leading local yard with plenty of weight relief. BALONNE (11) and LOLITA GOLD (12) ran first and third in the aforementioned Federal and can't be ruled out back 200m and also down in weight. The former will want the pace on. BANGER (13) is capable of quick improvement. UPPER HOUSE (9) resumes and is a market watch. SELECTIONS: A sense of timing about #6 Supreme Polarity.

Pace genuine with Crazy Culprit booting up on the fence to lead. MISS ELEGANCE (6) peaks seeking the hat-trick and it was easy the latest from the front. Has the speed to manage the wide gate and can go on with it with the 2kg claim for a good apprentice. LIPPSY SHUFFLE (5) will be better for the two runs back and has plenty up the sleeve. Needs a good ride from the hot hoop but gets the blinkers again and should go close. CRAZY CULPRIT (4) just missed the latest as favourite over longer. Had been threatening this trip leading up to that. Peaks and is a player using the low gate. SPENCER GULF (8) won't be far away with a repeat of the second-up placing. SELECTIONS: Keen on #6 Miss Elegance and the current $3.2 looks generous.

No noted lead on paper so a lack of any real speed here. SHE'S AN EAGLE (9) was immediately spelled after finishing second at Ipswich on debut in May. She resumed for the new stable a fortnight ago and the start proved very costly. She wasn't able to use gate two to her advantage after a tardy beginning and was left coursing 4-5 deep on the corner to try get involved. In the end the run wasn't too bad and she's bound to come on strongly in every way. Senior rider goes on and she's worth another chance. STUMPED (3) is new to the area. Plain effort first-up at Gosford behind a horse who since won again. Gets the blinkers on and can show improvement back in class. UNLEISHA (11) will have admirers. SELECTIONS: She's An Eagle for the win.

Foxgossip has enough early speed to find the front and set an okay tempo. MAAZLE (5) resumed much improved for the new yard just nudged out at Pakenham at long odds. Was slow off and wide and it was a really good effort. He will be tough to beat building on that. NARVAEZ (6) resumes for a leading yard off much stronger city races. Williams is booked and that's a decent push for his readiness. Draws to ride the speed and is feared. TYCOON THUNDER (2) will be fitter and is knocking on the door. The longer sprint suits and he should be right in the finish. OBEDIENCE (7) will race over further but the yard is going well and she brings excellent figures. May need one but keep safe all the same.  SELECTIONS: #5 Maazle can provide the betting edge at the each way quote. 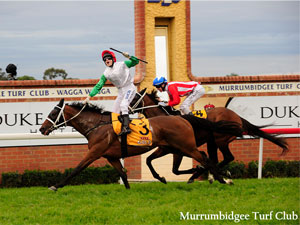