APOLLATE (1) has placed his past couple including a handy second over this track and trip two starts back. Looks a key player. ROCKOVER (3) is improving with racing and looks one of the dangers. ORAKEI (8) can take benefit from her first-up effort and is in the mix. AUNT BELLE (5) will strip fitter third-up and is one for the multiples. SUMMER BREEZE (9) is best of the rest.
SELECTIONS: Apollate to win.

As a FREE Racing and Sports offer, below is the Gosford Computer Card.

PITCHANUN (10) looks ideally placed. Has filled a placing at her past two starts and should not be troubled by the rise in trip here. Looks very hard to hold out. BOSCHENDAL (4) has had the two runs back from a break and just missed last time. Shapes as though the extra ground won't be a problem. Expected to go well again. JACK'S HONOUR (2) wasn't that far away in blanket finish last time. Rise in distance looks ideal and rates as an each-way chance here. MALTED MISSILE (9) was easily accounted for on a heavy track last time and getting on a dry surface here, improvement is expected.
SELECTIONS: Back Pitchanun.

DISMISSAL (8) has been threatening and has been heavily-bet the last two starts. Reaches peak fitness and is sure to take beating. STAR OF SUCCESS (4) just missed second-up after a slow start and has more to give. Will get back but finish hard and fitter is a threat. HYPERTENSION (6) has been knocking on the door and ran at even money the latest. Lifts to a longer sprint and that's a slight query. A gap to the rest and the late market should help sort them.
SELECTIONS: Backing Dismissal.

TOLERATE (1) missed 1L as favourite at Grafton for the sharp yard. He can control the race from the rail and is the one to beat in easier company and with a top rider going on. FAIRY BEAST (8) has had one blip in a string of strong efforts. She also finds easier grade and the 1.5kg claimer will position to come over the top of them. QUEEN OF THE NIGHT (9) had been tracking well before the latest in better races and can't be ruled out on the quick return. NORTHERN DRAGON (3) will be better second-up and can prove next best.
SELECTIONS: Backing Tolerate to win.

REFRESHED (5) returned well enough at Stawell to suggest that it can follow-up well today. Overraced and laid in but less than a length from the winner wasn't a bad effort. Can win today. CHATELAINE (7) can go ok first-up. Rates as a place chance at least. RAFFINE (4) had excuses at both previous starts. Goes ok on the synthetic so might be waiting for that. Can go in wider exotics. JUST LIKE MUM (8) does need to improve and is a best of the rest hope. NUKE (1) just needs to settle a bit better in the run but on recent form can show up in the placings.
SELECTIONS: Refreshed the win.

MAYA BAY (10) returned in good order beaten 1.3L at the Sunshine Coast. He has more up the sleeve and can go one better with the 1.5kg claim and getting the run of the race from the handy gate. The stable is flying. BETTER BE BETTER (1) ran his best race just beaten behind Kirra Lass. Keeps the 3kg claim and won't have to improve much to make the photo. DAD'S LAD (7) is lightly-raced and promising. Draws to advantage and has more to offer third-up. Stablemate HEADSPACE (2) will find this easier than the Gold Coast and won his only second-up start. In the mix.
SELECTIONS: Backing Maya Bay. 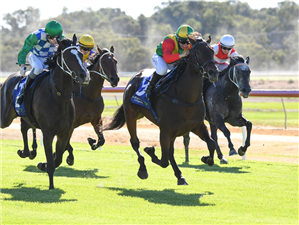