Plucky Kings down Bullets in NBL

The Sydney Kings have overcome a herculean 31-point effort from Nathan Sobey to claim a gritty NBL win over the Brisbane Bullets.

The Sydney Kings have avoided getting their pants pulled by a severely-undermanned Brisbane to emerge with a gritty 90-71 NBL victory at Qudos Bank Arena.

Down four key rotation players, including both American imports, the Bullets looked poised to pull off a shock upset on Saturday off the back of a herculean 31-point effort from star Nathan Sobey.

The Boomers guard showed plenty of guts in playing all 40 minutes, with backcourt partner Jason Cadee playing 39, while Tyrell Harrison pulled down 19 rebounds.

And it appeared their hard work may pay off, heading into halftime up by two.

But Kings big man Craig Moller produced a career-high 20 points off the bench - including three fourth-quarter triples - to help his side end a two-game losing streak and reclaim fifth spot.

Former NBA forward Jarell Martin chimed in with a 16-point and 10-rebound double-double, while Dejan Vasiljevic and Casper Ware added 13 and 11 points respectively.

"I started the season pretty average again (from three), I think I was 0-8 or something, which is exactly where I was last year," Moller said.

"I always knew I had this ability to shoot.. but it's another ballgame putting it on the big show out here. Confidence has slowly been building throughout the season and culminated into today."

The Bullets, who drop back to sixth, meant business from the opening tipoff, going toe-to-toe with Sydney for the opening 24 minutes despite their lack of star power.

Their zone defence forced a clunky Kings, two days after losing a heartbreaker in Perth, into bombing away from long range, where they shot a miserable 4-18 over the opening two quarters.

And the home side had no answers for Sobey down the other end, with the 31-year-old spearheading a 13-0 run in the second period on his way to a career-high 21-first half points.

But with coach Adam Forde's halftime speech ringing in their ears, Sydney shut down Sobey for most of a 21-9 third quarter before holding the visitors at bay for the final period.

In an ugly contest where both sides hit less than 40 per cent for the opening three quarters, the Kings caught fire with 29 points to pull away in the fourth.

Bullets coach Andrej Lemanis was unsure when Lamar Patterson, Vic Law, Anthony Drmic and Tanner Krebs would return, but praised the efforts of his backcourt.

"The reality is those two (Sobey and Cadee) are national team players," he said.

"We're gonna lean on those two now... the attitude with which they came in and approached it knowing they were going to carry a heavy load.

"There's going to be some highs and lows, that was the thing they were able to maintain, a good mindset through it all." 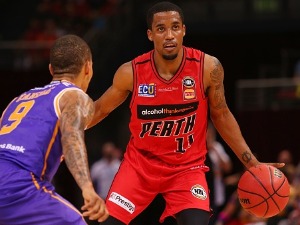