Racing and Sports highlight our standout plays at Australian TAB meetings for April 29.

LEAVE ME BE (8) had trialled well and just missed the placings at Gosford first-up when expected to win. Is a top yard and sharp improvement is on the cards. This is suitable. CINQUE TORRI (4) looked the part at the trials and wasn't far away on debut. Draws low and can make the finish with the extra fitness. DEHORNED UNICORN (5) has trialled well and didn't have the best of it on debut. Fitter and can improve quickly. HYPERYIELD (6) debuted off a sharp trial but missed the start and was required to use plenty of gas before folding up. Draws well and expect him to be a player if he jumps with them.

SELECTIONS: Backing Leave Me Be.

As a FREE Racing and Sports offer, below is the Wyong Computer Card.

ZIPPING BOY (1) won second-up last prep and that was in the wet. Has a perfect record over the distance, that is the key. DIMAGGIO (4) placed first-up and four winners have come out of that race. Handy. VINNI ROSE (6) didn't have a lot of luck here earlier this month. Can wind up late so if the track is favouring swoopers by now then upgrade this one. THAT GIRL (5) didn't have a lot of luck at Sandown and has been taking on harder company of late. Has to be included. LUCIFER'S REWARD (3) didn't like the track conditions at Moonee Valley last time. Not the worst going around tonight but more a wider first four chance.
SELECTIONS: Zipping Boy the win and a saver on the quinella with Di Maggio. Vinni Rose goes in if they can make late ground.

SPIRIT ESPRIT (3) has been plying his trade in much harder races at Eagle Farm and will appreciate the drop in grade here. Has three wins and two placings from ten attempts at the distance and will be rock-hard fit for this fourth-up from the spell. The testing material. The consistent DISCO MO (1) has finished in the top three at eight of his past ten starts and has a win and four placings from six starts at this track. Looks the main danger. ASK NINO (5) loves this course with four wins and two placings from nine spins. Has to be included. STUBAI (2) will strip fitter second-up from the spell and STAR SILK (4) has placed two from two here and may earn some minor money.
SELECTIONS: Spirit Esprit to win.

MIMI'S AWARD (3) was sent around at prohibitive odds last time and got the money in good style. Chased home the impressive Steinem at previous outing. This looks an ideal assignment. Hard to beat. DOUBLE DELIGHT (6) has been a little plain of late but did win this trip three starts back. A repeat of that will see her go close here. KALALO (4) had heavy support last time and battled home usefully to finish just out of the money. Meets an even bunch here and is worthy of each-way thought. MISS MADEC (5) wasn't a bad effort last time over a shorter trip and is worth considering over the extra ground here.
SELECTIONS: Back Mimi's Award. 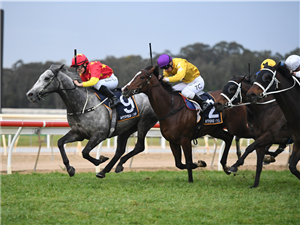