Trekking To The Everest, Winners All Round For Ladbrokes Caulfield Guineas Day

The 2019 Stella Artois Caulfield Cup Carnival kicked off today with Ladbrokes Caulfield Guineas Day, which saw more than 22,000 racegoers flock to the New York-inspired trackside festival to enjoy a sun kissed day of world-class racing, entertainment, hospitality and style at The Heath.

The Freedman trained galloper was behind a slow tempo but jockey Mark Zahra managed to pull his mount and explode down the outside to claim victory to the roars of the Heath crowd. Groundswell (3rd) made it a race to remember for Anthony Freedman, while the gallant Alligator Blood finished second by the shortest of margins.

There was a boilover in the $500,000 Lamaro's Hotel Sth Melbourne Toorak Handicap (1600m) with Fierce Impact claiming the Group 1 feature for Matthew Smith, with champion hoop Craig Williams notching up the second Toorak of his illustrious career.

And Trekking has claimed the final slot in next week's $14 million The Everest, after winning the $400,000 Schillaci Stakes (1100m). Trekking's place in The Everest as the MRC's representative will be confirmed tomorrow, pending a vet check and confirmation from the Godolphin team.*

The win was particularly thrilling for MRC member Mark Lloyd, who drew Trekking in the MRC Membership Everest Sweepstakes. Lloyd now stands a chance to share in the winnings of the MRC Slot holder when they race at Randwick next Saturday in The Everest.**

The cool NYC-themed Caulfield Racecourse saw the return of the popular David Jones Fashion Stable, which featured two glamourous runway shows and the addition of a new Inner Circle Beauty Bar with leading brands such as Sephora, MOR and Nine West to pamper racegoers.

The Dyson Style Stakes featuring Joey Scandizzo Salon attracted hundreds of stylish guests to custommade photography studios and enter the digital photography competition. Entrants from today's event will be shortlisted and combined with entrants on Stella Artois Caulfield Cup Day, where the winners will be announced.

The Bondi Sands Surf Lodge provided guests with an unbeatable pool-side view of the track, while the revamped MRC Young Members Jockey Club presented by Gordon's Pink Gin proved the place to be for cool DJs and a party atmosphere. 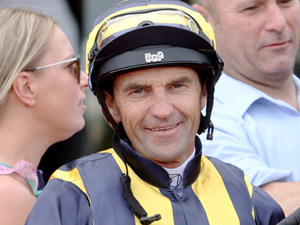