We head back to Flemington for the Creswick meeting and the feature throws up an interesting puzzle for punters.

A key part of that puzzle is the Peter Moody-trained Snickerdoodledandy who burned the turf late on when winning over 1400m last time and looked nailed on to win again on the back of that. But that follow up win was probably fancied to be at 1400m or even up to the mile. She showed terrific late speed so on that evidence you would say she has the pace to cope back at 1200m but she might not have much margin for error in a very competitive line up.

At around the $10 mark a fresh Aidensfield is every bit as appealing. She pulled up lame in her lone autumn run but ran a couple of smart races back in the spring that make her a match for any of these.

The straight course, and the way races develop there, looks like suiting a filly that was closing down Odeum with good late speed back in September.

She goes up as our each way play with out best coming up earlier on the card where South Pacific is fancied to land an overdue first win in Australia.

It would be somewhat fitting that it would come this week given that his latest win came at Royal Ascot where he landed the 2019 King George V Handicap over a typically deep and competitive field of stayers - closest of which was his then stablemate, and familiar face downunder, Constantinople.

Now that one is hardly the type to throw up as a pointer to that being strong form given the way things have gone for him down under, but back then it was strong form, and South Pacific has shown glimpses since arriving, starting hard in the betting a couple of times at Flemington last winter and running solidly enough in circumstnaces that were not ideal.

Tempo was lacking for him there, but there looks to be good speed engaged in this and we should get a true test over the trip this time. Stamina is South Pacific's forte and he showed that when sticking on gamely in the Warrnambool Cup last time, that form having since worked out pretty well.

Rivals here are a motley crew. A hurdler, a soon-to-be hurdler, and Fanciful Toff joining a new yard after pulling up with excuses at his latest couple. Throw in a horse from SA in Master Chum who ran a cracker last time but was big odds and must be a distance query and it's all bits and pieces away from South Pacific who looks to find a bit of a 'if not now, never' scenario. 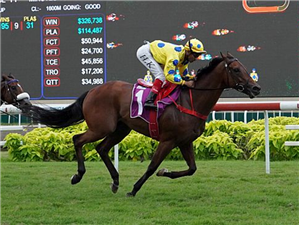