The money came for the Clare Cunningham-trained KIMMYLEE resuming off solid Sydney trials and found the mark. EURO RHYTHMIC burnt to an early lead and was joined at the 600 by Assassin's Arrow. Kimmylee sat comfortably back in the small field. Euro Rhythmic put two length on them hand way down the straight but Kimmylee emerged with a withering burst, coming away to win a length on the line.  FEVER TREE trailed the leader and battled on well. Looked a little new in patches and will have taken good benefit. The winner and runner-up both impressed off spells.

WAIHEKE ran a heavily-backed favourite over the middle distance. OLMETO led at a comfortable tempo the resting settling in pairs before Waiheke made a mid-race move to lead at the 1000m.  He was still in front turning but pushed along. DHIAGA made a long run around them and got a head in front at the 150m. The winner FOX BEAT sat back on the rail and was last at the 800m. He had plenty to give and was held up momentarily on turning before coming with long strikes to win going way. Olmeto kept at it to just grab second from Dhiaga and Waiheke. The winner improved sharply and relished stepping up to the middle distance. He really covers the ground and on that will win more. The other placegetters were brave in defeat.

The scratching left only five runners with MONTE MAJURA running favourite. Monte got a comfortable lead and the others basically raced in singles behind him. He was joined by LOLITO GOLD on his inside at the 100m and the mare proved a touch too good. The honours were with them. Lolita Gold had good figures at the mile so it wasn't too big a surprise. Monte was tough as usual and this was his chance. The favourite HIGH STREET had every hope. MADDIE'S THE BOSS finished on well, but suffered a bleeding attack and has incurred a mandatory 3-month ban.

EXTREME JEWEL looked well-suited and won the race as favourite. INTERCONTINENTAL led bowling along and Extreme Jewel sat on him racing against the recent pattern. Intercontinental was still racing boldly at the 200m but was worn down by the winner who came away. GUNZAR finished it off okay in third with the others well-beaten. BRAD was a well-supported second favourite but was slow away and was three wide down the back and didn't give much.

There wasn't much between INCEPTIVE, MOHAHNA and SUGAR PINE in the betting, but it was one-way traffic with Inceptive leading and winning comfortably. With the benefit of the first-up outing, the Matt Dale-trained mare raced much more kindly and was well rated by Loy. The favourite Mohahna trailed her all the way. INCEPTIVE shied away from the running rail a couple of times before the turn, but led down like a good horse to win easily. OVERFLOWING made good improvement running on well and Mohahna in third and the others seemed to have every chance. Inceptive looks capable of winning better races than this.

JOY AND MIRTH made a big impression winning the Maiden at this venue and delivered the double backed deep into the red. Yesteryear was bustled along to lead and there was a bunch on his flanks spread wide at the 1000k. The winner was fourth at this point and improved to be the widest on the turn. She showed a sizzling turn-of-foot to win by nearly 5L with the second-favourite Diamond Class running-on clearly into second, with another space to the rest. Joy and Mirth is one to stay with.

With the scratching Of Heaven And Earth, BALONNE flew the Dryden stable flag in the Federal and did it with aplomb. ATHONIS led the 11 horse field with the second-favourite PEYTON PLACE sitting on him. Balonne was tucked away midfield and it was a good ride from McDougall to get him into a winning position after turning. He really knuckled down to get the better of Peyton Place. ONS VIER used the rail and just nutted a brave Athonis out of third. The well-travelled McDougall and Dryden have forged a linked strike rate of 20%.

The Danny Williams-trained DENESC was backed into favourite with McDougall looking for his third winner of the day. However it was the Doug Gorrel prepared EXAGGERATE who got the chocolates with the handy 2kg claim. SKY MISSION won the jump and led from JEWEL OF THE CLAN with WASHINGTON TOWERS three deep near turning clear of the rest. WASHINGTON TOWERS took Sky Mission just after the 200m before Exaggerate burst through closer to the rail  to win by a half length, with 3L back to KOPAONIK and Jewel Of The Clan. Washington Towers was easy in the betting and it was a big effort three wide all the way off a four  month spell. The colt is certainly one to follow. No knock the winner who came from well-back with a weaving run showing a sharp turn of foot. Kopaonok took the eye late first-up in a pleasing return to form. 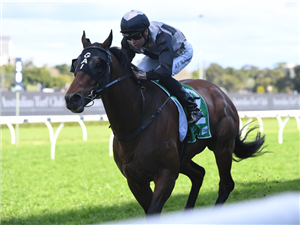