The Shane Baertschiger trained Rise Of Empire won well last start and appears well placed to go back to back in the final event at Kranji on Friday night.

Only lightly raced, Rise Of Empire joined Baertschiger's care at the back end of last year, formerly trained by Trevor Sutherland in Australia.

Narrowly beaten at big odds (60-1) in his Singapore debut, Rise Of Empire again went down narrowly, when sent out the $1.40 favourite at his next start.

On both occasions he returned decent figures and duly saluted at his next outing, when far too good leading throughout over 1200m.

Ridden by Vlad Duric, Rise Of Empire always had the race under control and showed a good turn of foot when racing away to score by 1.8 lengths.

Lining up off a 56 day break there, he should have more improvement to come and he gives the impression he will relish the step up in trip.

From the inside draw he is sure to adopt a forward position and should prove hard to gun down in the straight.

The much in-form Vlad Duric sticks and will be hoping his fantastic run can continue, striking at 28% from his last 50 runners and 24% from his last 350!

When riding for Baertschiger the pair are striking at 29% and with even luck, they should be able to continue that upward trend.

The Michael Clements trained Silent Partner was an eye catcher last start behind Strong N Powerful and has to be kept safe third up.

Stepping out at just his ninth start, he too is only lightly raced and has drawn to get a lovely run for Simon Kok.

When assessing Timeform weight adjusted ratings he appears well placed and if able to hold his form, he is sure to make his presence felt.

The Ricardo Le Grange trained Water Rocketchases the hat-trick and also has to come into calculations.

While only a narrow winner at his last two starts, he has done a good job and is trending the right way.

The wide draw is some concern, however he is expected to press forward and be in this for a long way.

Of the rest, the Steven Burridge trained Dazzle Gold appears the next in line. 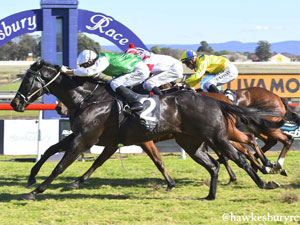