Racing and Sports highlight our standout plays at Australian TAB meetings for July 19.

Wodonga: Race 1 @ 12:15pm
Leneva Noir can lead from the low gate. DIAMOND MOMENTS (8) improved again just missing over this trip in stronger grade at Bendigo. She will get a soft run from the handy gate and is sure to take beating for the Eden yard. LET'S GO HOME (10) has also been racing at the provincials and will be ready to fire third-up. Her best is good enough and the Team Hayes galloper is the danger. AHADI FARASI (5) missed a lip at Wagga but gets a wide gate today. Gets the small claim and won't be far away. LENEVA NOIR (9) was tracking well before the latest when she was terrible here on the heavy track. She's trialled since and should go better running along from the low gate. SELECTION: This is a suitable assignment for #8 Diamond Moments.

As a FREE Racing and Sports offer, click below for today's Wodonga Computer Card.

Port Augusta Race 3 @ 2:30pm (AEST)
Fulton Street can lead from Prime Suspect and Connermara Rose. FULTON STREET (1) won here by 7L before a nose defeat in town. He than came back to this venue and won this trip in stronger by 8L. He will control the race and still looks very well-placed keeping Collett's claim. CONNERMARA ROSE (3) runs along and made the quinella when spaced behind the above before missing 1.5L up in trip in Open grade. She'll manage the shorter trip and won't be far away. REX GOLIATH (2) made sharp improvement winning the 54 on the same day. Gets the weight drop and the 3kg claim and can make the finish. TYCOON FLUTTER (8) was just beaten by the above in that race and will race close-up again. SELECTION: #1 Fulton Street should have these well-covered.

Narrandera: Race 5 @ 3:10pm
Expecting a solid speed. MOSS THE BOSS (4) has been mighty consistent. Ridden quieter last start and finished off at a rate of knots, going down a head to the tearaway leader Starliv. That's the right form. His efforts all through the preparation have been faultless, just needs to turn good runs into winning runs. Won't get a better opportunity. LET'S GET ANIMAL (6) is deep into a campaign but continues to race well. Settled too far back when fourth to Foxlike at Wagga during the week. Hard fit and gets in well with the claim. SUPEROO (2) has been disappointing of late but this is easier. Distance rise is a plus. Each way claims. ROCKY HIGH (11) best of the rest. SELECTION: Moss The Boss looks a solid bet nibbling around that each-way quote.

Kalgoorlie Race 5 @ 4:47pm (AEST)
Concrete Madam can cross over and lead from Golly Em. CONCRETE MADAME (4) is fast and peaks off three strong efforts as favourite. She will make short work of the wide gate and Pike goes on. She will be very hard to get past. CLOAK AND DAGGER (5) came from the back and won easily and then raced handy beaten a lip also at this level. He will get a soft run from the low gate and should be right in the finish. KNIGHT TEMPEST (3) brings good figures but has been mixing trips. He will run along and has won over this distance. He can't be dismissed having been freshened. KING'S AUTHORITY (2) needs a good ride from the claimer but is going well enough to make the finish back plenty in grade. SELECTION: #4 Concrete Madam comes to peak and can win with the leading hoop riding for the leading local barn.

Sunshine Coast: Race 8 @ 5.25pm
Expecting a solid tempo. RUN FOR GLORY (2) deserves to be favourite. Gave them a start at Gold Coast first-up and almost reeled them in, going under by a short head. Winner of that was stablemate Tracey May who looks smart. Happy to trust that form. Wide alley is no hindrance for a horse who settles back and with uninterrupted running down this long straight he's expected to take plenty of beating. CLEAR THE BILL (4) is always thereabouts. Needs another win but likes it here at the course. 1200m suits. LOTSA SPIRIT (3) has been a costly conveyance this time in, despite running well. No harder here. VOGUE ROCK (11) best of the rest. SELECTION: Run For Glory to end proceedings. 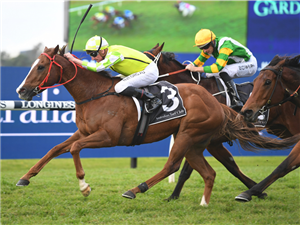