Lim's Kosciuszko Has Hat-Trick Within Reach

Unbeaten three-year-old Lim's Kosciuszko appears well placed to bring up the hat-trick when due to contest the seventh event at Kranji on Saturday.

Trained by Dan Meagher Lim's Kosciuszko was a surprise winner on debut (19-1) when defeating Elliot Ness before improving again at his second outing when far too good.

Ridden by Harry Kasim, he gave his rivals little hope last start when doing it at both ends over the 1200m journey.

An easy winner to the eye, the clock also backed up the strength of his performance, he is clearly a horse trending the right way.

By Kermadec, Meagher has kept him on the fresh side (34 days) with a nice trial in between.

Ridden by Danny Beasley he travelled wide throughout and did it easily scoring by just over a length.

Stopping the clock at 1:00.12 it was a sharp piece of work and should top him off perfectly for Saturday's event.

Drawn a touch awkwardly but expect Beasley to take control early and he looks well treated at the weights.

When assessing Timeform weight adjusted ratings he sits clear and with further improvement expected he should prove very hard to beat.

Not many horses are able to bring up three on the trot but Lim's Kosciuszko appears more than above average.

The Tim Fitzsimmons trained In All His Glory mixed his form last time in, but is more than capable when right and has to be kept safe in his stable debut.

Formerly trained by Michael Clements he placed in six of nine attempts and should be ready to go with two trials under the belt.

Already a winner at this level he looms as a major threat.

The Desmond Koh trained Wawasan broke through for a deserved maiden win last start and while this is a big step up he looks well placed down in the weights.

Drawn well he should roll forward from the outset and be in this for a long way.

Of the rest the consistent What You Like appears the next in line. 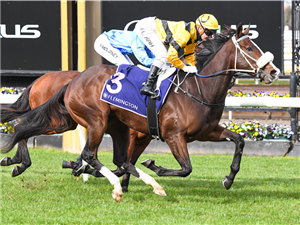